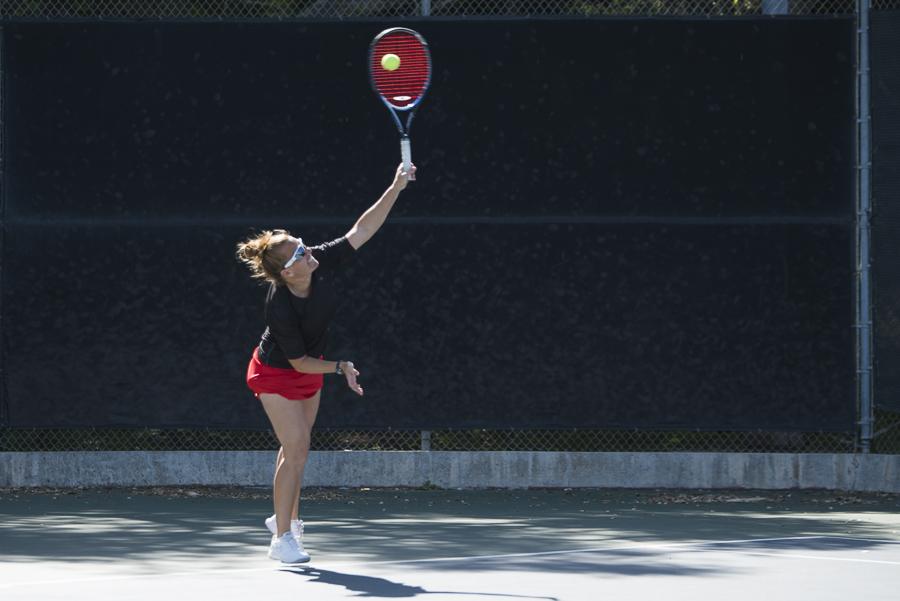 Teresa Downey serves the ball during a match against Antelope Valley Tuesday, March 18, at Pershing Park in Santa Barbara. The Vaqueros won, 7-2, and Downey remained undefeated in conference play.

The Vaqueros (4-7 overall, 4-5 conference) recorded their only other win this season against Antelope Valley on Feb. 15, 5-1 singles and 3-0 doubles.  The other two victories have come by forfeit.

Teresa Downey, 46-year-old freshmen, stayed undefeated in the Western State Conference with a 6-0, 6-0 win over the Marauders.

“I think I did well,” she said. “I prefer to play singles since I played it for a long time but doubles are fun too.

Gabriella McDaniel, team captain, suffered a tough loss in her singles match against Cinthia Garcia who hit with power and consistency from both sides.

“I prefer doubles,” McDaniel said. “It’s more of a team unit and it feels good to have someone else there.”

McDaniel and her partner Kenzie Usher won the doubles match 8-3.

City College will play again at Glendale College at 2 p.m. on April 1.