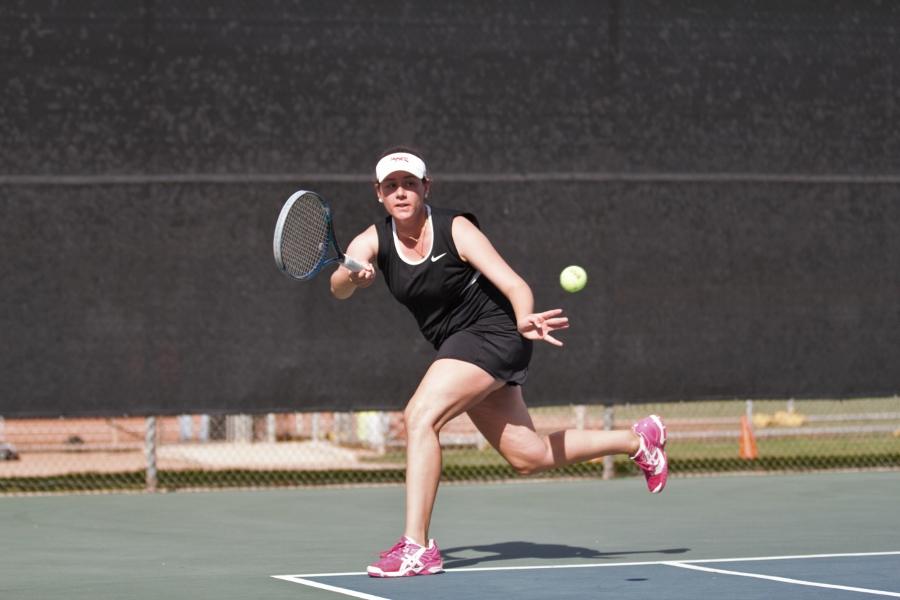 Women’s tennis captain Gabriela McDaniel rushes to return a serve in a match against Glendale College Tuesday, March 4, at Pershing Park in Santa Barbara. City College fell 1-8 to Glendale and is now 1-5 on the year.

“Glendale had strong players from top to bottom, but the Vaqs fought hard.”

Despite dropping both of her singles matches, Gabriela McDaniel found positive improvements to take out of her day.

“I have been in a little bit a funk lately,” McDaniel said. “So today was all about just playing my game and instead of being a tentative player, making sure I played assertively.”

“I felt like I got back on the right track to doing that.”

Vaquero player Teresa Downey took the only City College victory of the day in a singles match against Glendale’s Viktorya Shimakova, 6-1 and 6-2.

As the games finished up and Glendale came out on top, the Vaquero squad still held their heads high.

The day started with an announcement that  McDaniel was unanimously voted team captain.

“Its actually kind of nice,” McDaniel said. “I didn’t expect it at all. Instead of a split team we are a united team.”

Kenzie Usher shared many of the same feelings about the state of the team.

“Being new to the team this year I instantly felt the unity and connection the team has,” Usher said. “It’s really great.”

“A captain needs to be devoted to their team. First to practice, last to leave, with the strongest work ethic,” Kronberg said.

Outside of practice the captain has other responsibilities to help the team run. They organize the players, help show new students their way around academically and keep the coach informed on team issues.

“Gabriela has done all these things on her own. It’s in her nature,” Kronberg said.

“I decided we should have a captain, and to me Gabriela was the obvious choice. I spoke privately with each player and asked them who they thought should be the captain, and everyone said Gabriela without hesitating.”

Already halfway through the season, Coach Kronberg has seen the growth in the team.

“The first half of the season has been a work in progress, and I am very happy with how far we’ve come,” Kronberg said. “The last two matches every player has competed hard with great focus, and each one has improved in singles, while also growing as a doubles player with their partner.”

The Vaqueros next match is against Santa Monica College at 1 p.m. on March 11 in Santa Monica.