City College softball pitcher fueled by love of the game 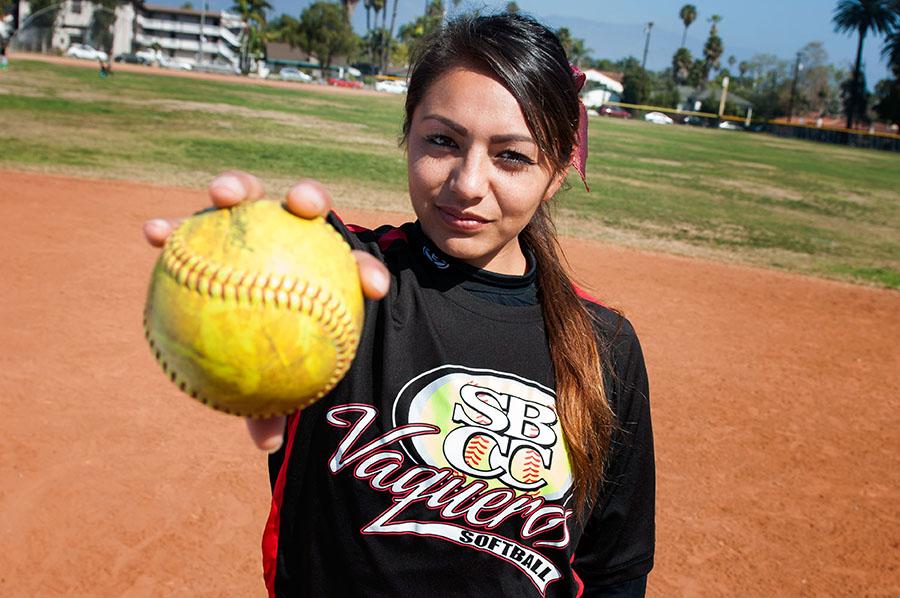 Vaqueros softball pitcher Celeste Acosta holds up a ball at Pershing Park on Feb. 23, in Santa Barbara. Acosta’s four victories have accounted for all of the Vaqueros wins this season.

It was the first game of the 2013 softball season, and Celeste Acosta sat on the bench in black sweatpants, matching turf shoes, and a long sleeve shirt that read “SBCC Softball” across her chest.

She gazed across the field, and the only thing that snapped her out of her daydream, was the sound from the umpire calling “play ball!”

The San Jose native in her second year at City College had only one problem; she couldn’t throw one pitch the whole season.

Acosta, now a redshirt sophomore, did exactly what her title says last season. A redshirt, by definition, is given to an athlete whose program wants her to be with the team for more than their two eligible seasons. Commonly given to an injured player, that is what set Acosta apart from the norm. She was ready to go.

“I was short three (academic) units,” Acosta said. “It was rough.”

So the sideline became her home. Each pitch that was made was another one she was missing out on.

“It sucked,” Acosta said. “You just want to be out there, you know?”

But Acosta stayed focused, and she decided to keep a positive mindset about her misfortune. She accepted her situation, never blaming anyone but herself. But rather than deeming her situation a curse, Acosta took it as a blessing.

“It actually made me a better player,” Acosta said. “It made me work harder on the field.”

The hard work is paying off for Acosta who has recorded all four of the team’s wins so far. Striking out 23 batters and only walking eight, Acosta has an earned run average (ERA) of only 1.7 runs-per-game. With City College backing up their ace, averaging five runs-per-game, the message is clear that the team has their pitcher’s back.

“She works super hard,” pitching coach Kailey Snyder said. “If she ever gets in trouble in-game, I only need to say a key word and it gets her right back on track.”

But for Acosta’s entire redshirt season, it wasn’t a matter of changing her pitching motion, or mixing up a pre-game ritual. It was striving to get better every day without the help of being physically in the game. Instead, it was a test of her heart for the game and patience as a player.

“I just tried to be a positive leader even though I wasn’t playing in the games,” Acosta said. “Hustling on and off the field, trying to set a good example you know?”

But the modest mindset of City College’s key pitcher isn’t something spurred by last year’s outcome. Acosta comes from a family of athletes whose positive attitude started in San Jose, and the youngest sibling is carrying it out in Santa Barbara.

“I basically learned everything from (my Dad),” said Acosta. “Not just skill wise, but patience and staying humble too.”

When you watch the 5’4 righty on the pitching rubber, few things bother her. She keeps a cool profile, and her confidence in her teammates is something special that keeps her going through seven innings. And, on some occasions, 2 full games in one day.

“Keeping my composure is one of my biggest things,” Acosta said. “If we’re struggling, I try to calm [my teammates] down.”

City College has played two double headers this season and, in both, Acosta has pitched both games with only a short 30-minute break.

Acosta has known since a young age that she was destined to be on the diamond. Hitting softballs before she could read and always begging Dad to play catch, her father, a former college baseball player, saw a small reflection of himself that skipped his son and oldest daughter.

“I would always ask to pitch to him right in the front yard,” Acosta said laughing. “He was very patient with me.”

She was one of the leaders on her talented Mount Pleasant High School team. Her dreams of playing college softball were more expectations than hopes, but Santa Barbara clicked for her.

“I looked up how the team was and I saw they were successful,” Acosta said. “It’s also a great school and Coach Congleton made me feel really comfortable when I visited.”

Since comfort is the key to many aspects of Acosta’s game, the chemistry the 15 girls playing for City College have is something very special. With only three freshmen on the team, it’s likely you’re hitting behind not only a teammate but also a friend, or throwing out a runner to a base covered by a roommate.

Every outing Acosta has isn’t for the stat book but for the girls behind her. The same ones she’s been with for three years.

With 93 percent of the innings pitched coming from the arm of Acosta, and 92 percent of the strikeouts, four-year schools will be poking around Pershing Park with radar guns, sunflower seeds, and sunscreen.