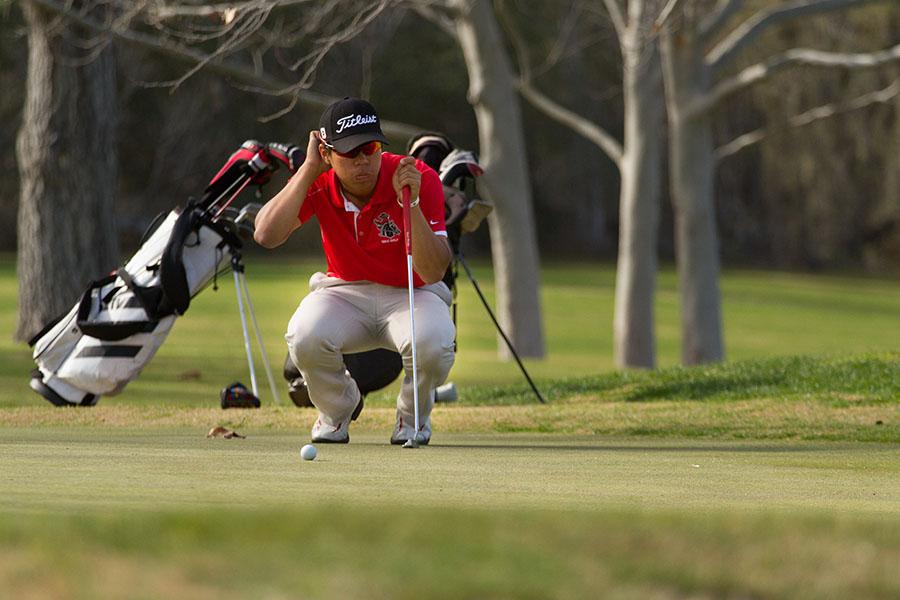 The City College men’s golf team came up short on a breezy President’s Day afternoon at Alisal Ranch in Solvang and placed third in their first home match of the season.

Coach Chuck Melendez and his team hosted seven schools for Western State Conference match No. 2.  The Vaqueros finished behind College of the Canyons (375) and Ventura College (386) by one stroke (387). In a match where every shot turned out to play a factor, the Vaqueros couldn’t pull out a victory and are still looking for a first place finish on their 2014 season.

City College was led by foreign exchange student Jackie Chan who shot a two-over par 74 on the day. Two shots behind him was Santa Barbara High School graduate Alec Constantinides who ended the day with a four-over-par 76. The back nine was working for Constantinides who knocked in an impressive eagle putt on hole 10. He then went on to birdie holes 12 and 14 and ended four-under-par on the back nine.

“The greens were playing perfect,” Constantinides said. “A couple patches but other than that they were really soft.”

“Felix is a great young man,” Melendez said. “He is a very special player.”

City College’s young squad is led by two foreign students in Mory and Chan. Despite the loss on Monday, the foreign duo have put up impressive numbers thus far and are a large reason City College is tied for second in the WSC (11-3) with Central Coast rival Ventura College.  Conference Juggernaut College of the Canyons (14-0) is in the lead and has also won three state titles in the past eight seasons.

As for Chan, he is the second player from Hong Kong that Melendez has had the past two seasons. Last year, Chinese golfer Steven Lam placed second in the state and Coach Melendez thinks Chan can also be a serious threat to opposing schools this season.

Although the Vaqueros couldn’t come out with a victory, there is a lot of golf left and Coach Melendez said he is still optimistic about the home course, as he wouldn’t want to play anywhere else.

“They treat us like gold out here,” said Melendez. “Maybe we were just a little excited about playing at home.”