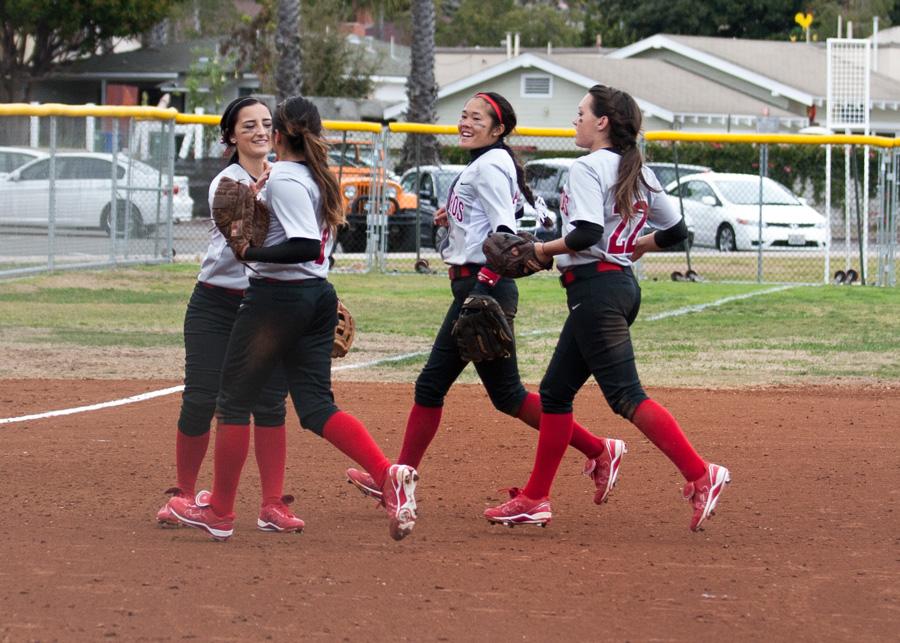 The Vaqueros celebrate after winning the first of two games against Pasadena City College on Feb. 8, 2014, at Pershing Park in Santa Barbara, Calif.

The City College softball team took the diamond Saturday, Feb. 8, against the Pasadena City College Lancers in its first two home games of the season.

It was a gloomy day at Pershing Park but the energy was high as the Vaqueros looked to rebound after a disappointing loss in their season opener.  City College lost to Santa Ana College 6-2 on Jan. 28.

In the first inning sophomore pitcher Alexandra Abbott (No. 14) had trouble finding the strike zone and was replaced by Celeste Acosta (No. 1) after only recording one out. The first run of the game came on a dropped third strike and a close play at the plate. After a wild pitch, City College found themselves down 2-0.

In the bottom of the second inning, the Vaqueros found a spark in their offense, starting with a hit by freshman Christal Vierra (No. 17). Freshman Taylor Stanek (No. 2) also came up big for the Vaqueros in the inning with a two-run triple.

“It’s good for the freshmen to prove a point,” head coach Paula Congleton said. “It will make them feel more at ease.”

Going into the top of the seventh up one run, Acosta still had the lead. She got out of the inning 1-2-3 and the Vaqueros got their first win of the season, 5-4.

Acosta pitched six-and-two-thirds innings, only allowing two hits, making her 1-1 on the season. She gave all the praise to her teammates and coaches after the game.

“My coaches made sure I was ready,” said Acosta. “My teammates know that as long as I perform, they will back me up and get runs on the board for me.”

Game two of the doubleheader started out in a familiar fashion for the Vaqueros as Acosta was back on the pitching rubber. Pasadena scored one in the top of first.

The offense came alive again in the bottom of the second inning for City College with a two-run RBI double by catcher Dakota Wilcox (No. 10).

Later in the game, left fielder Brianna Gill (No. 9) launched a ball over the left field fence for the first home run of her career, giving the team a three-run lead in the third inning.

In the sixth inning, with City College up 4-2, freshman international student Emma Tegth Nordin (No. 8) stole two bases and scored on a pass ball giving the Vaqueros some insurance.

Acosta shut down Pasadena again in the top of the seventh, winning two games on the day and improving her record to 2-1 on the season.

Sophomore outfielder Brianna Portese (No. 7) finished the day going 4-5 for the Vaqueros.

“I was feeling super juiced,” said Portese. “First games on the home field, so we were pretty excited.”

Freshmen Stanek, Vierra, and Tegth Nordin all contributed scoring runs for the Vaqueros. On a predominately sophomore squad, the success of the first-year players adds confidence to the team knowing that they are deep at every level.

With a majority of the team being second and third year players, chemistry and compatibility is very important to Congleton.

“It’s kind of like no woman left behind,” Congleton said. “They are 100 percent a team.”

Congleton said the last time an experienced team like this was around was in 2011, which was also a second-year heavy team that ended up winning the Western State Conference championships.

The Vaqueros take the field again against LA Mission at 2:30 p.m. on Feb. 11, at Pershing Park.