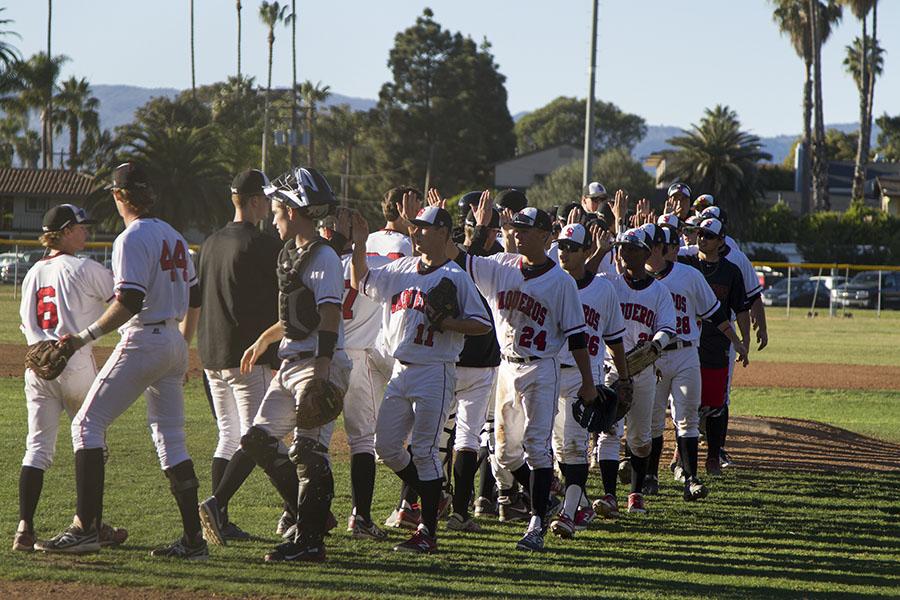 The Vaqueros were led by solid pitching and timely hits to put the Storm away on Friday and Saturday at Pershing Park.  Only three sophomores played as the predominantly freshman team showed resilience and confidence in their first collegiate games.

The Vaqueros began the season with a 9-3 victory over Napa Valley behind sophomore pitcher Tyler Gilbert’s (No. 12) strong start Friday afternoon.

Gilbert, 2013 Western State Conference North Pitcher of the Year, allowed one run over six-and-two-thirds innings while scattering four hits to the visiting Storm.  The left-handed sophomore hurler who has committed to the University of Southern California struck out six and walked only one.  Of the 76 pitches thrown by Gilbert, 65 were fastballs.

“It felt good being back,” Gilbert said.  “I was confident coming into today and I liked the way it worked out.”

Sophomore left-handed pitcher Ryan Massengale (No. 34) relieved Gilbert in the seventh inning to close out the game.

The Vaqueros capitalized on six errors by the Storm.  Freshman right fielder Christopher Player (No. 33) led the offense going two for three with a walk, run scored and run batted in.

“It’s good to get a win on opening day,” head coach Jeff Walker said.  “It’s been a couple years since we’ve done that.”

The Vaqueros persevered and were able to take the second game of the series 7-5 over the Storm in a back-and-forth game until the end.

Trey Barrett (No. 44) hit a two-out double that brought in two runs in the third inning. The Vaqueros tacked on one more run to bring the score to 3-2. Barrett reached base three times and had a key sacrifice bunt in the seventh that lead to another big inning for the Vaqueros.  He redshirted in 2013 after hurting his knee early in the season.

“I’m stoked to be back,” Barrett said.  “I felt really comfortable and didn’t let myself get beat.”

Freshman Noeh Martinez (No. 26) entered the game in the fifth inning as a pinch hitter and had two runs batted in as well as a diving catch in right field.

Larson was able to keep the Storm offense at bay, only allowing two runners to reach base in the final five-and-one-third innings en route to earning the victory.

Freshman starting pitcher Justin Bruce (No. 11) pitched a complete game for the Vaqueros, allowing two runs in a 9-2 throttling over the Storm.  Bruce gave up only four hits and one walk while striking out five.

“I thought it was only seven innings at first but then figured out it was nine,” Bruce said on his complete game effort.  “Our defense was amazing today.”

The offense got started early capitalizing on errors and stolen bases. Barrett had another two-run double and scored on third basemen Matt Gimenez’s (No. 5) RBI single in the fourth, giving the Vaqueros a 5-0 lead.

City College put the game out of reach for the Storm in the eighth inning with four more runs to finish out the game, 9-2.

Bruce struck out the final batter of the game and showed his first real sign of emotion as he pumped his fist while his teammates came out to congratulate him on his first victory as a Vaquero.

“We’ve got a lot of depth on this team and a lot of talented guys,” Walker said.  “We’ll enjoy this one and think good thoughts when our heads hit the pillow tonight, but we’ll get back after it on Monday.”

The Vaqueros travel to LA Harbor Friday, Feb. 7, and to Saddleback College on Saturday, Feb. 8, for a doubleheader.