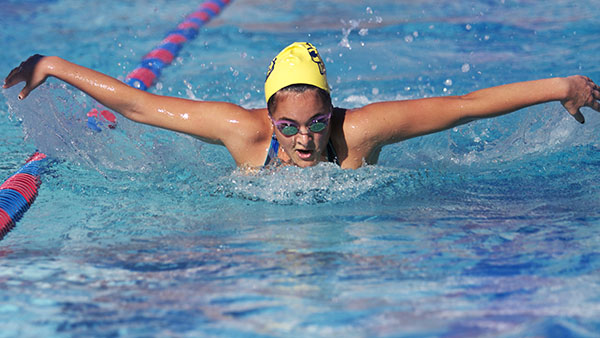 City College’s newest sports team is preparing for a February start with 17 women swimmers and a new head coach.

“What’s important is making better people for life and giving them some opportunities where they manage their time better and, consequentially, their academics improve.”

Roth said he has no expectations about swimming results and the goal for the team’s first season is getting acquainted with the each other.

City College added women’s swimming to the roster of athletic programs to better balance the genders to comply with Title IX requirements.

After extensive polling, athletic officials determined that women’s swimming would be the biggest draw. They are also considering adding a women’s water polo team.

The swim team is still fluctuating in size, but Roth said the 17 swimmers originated from the 30-student swim class.

The athletes have to participate in the swim class to be eligible to compete on the team.

“We have a really unique group of girls,” said Roth.

He said there are some members that have been swimming for most of their lives, while others have no experience besides his swim class. Roth also said he has six international swimmers on the squad.

The swim team joins the Western State Conference and will compete against other City Colleges.

The team has been practicing at San Marcos High School where they will continue to prepare for the season.  Roth is the head coach of the girls swim and dive team at San Marcos, which made the location prime for the new City College team.

“We have all the conference results from last year, so we take those times and apply them to what we do in practice,” said Roth.

Roth said his swimmers share a distinct attitude that propels them in the water.

“The one common threat they all share is that everyone appreciates their opportunity to have this chance one more time,” said Roth.

Lauren Shackelford, a graduate of Dos Pueblos High School, said her athletic experience with Roth was what made her join the team.

“Chuckie has background with a lot of the girls here,” said Shackelford. “It’s a good program.”

Shackelford also said she’s excited to be on a team again and enjoys the aspect of team comradery.

Rachelle Visser, another swim team member, said she looks forward to the season. She said she is excited to be a part of the team because it’s different from the one she was on in the Netherlands.

According to Visser her team back home was co-ed and members were a variety of ages.

“It’s very different here; just to compete for my school,” she said. “I’ve never done that before.”

The women’s swim team will have their first WSC meet at 10 a.m. Saturday, Feb.15, in Ventura.

“Regardless of what happens, the girls who are out here truly want to be here and value their experience. They are cherishing it, and as a coach, that’s what you want,” said Roth.