Breaking into the locker room and out of the stereotype

I’m rolling up my dainty sleeves and getting down to the brass tacks of it. 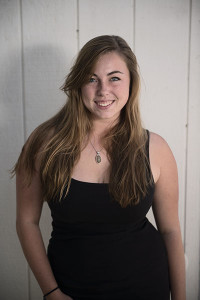 Being a woman in sports journalism is hard. You don’t get the same access, the same treatment or the same stories.

It comes down to this: I don’t have balls.

As Betty White would say, “Why do people always say ‘grow some balls?’ Balls are weak and sensitive. If you wanna be tough, grow a vagina. Those things can take a pounding.”

Although I wouldn’t have put it that particular way, good ol’ Betty has a point.

Women are stronger than we look.

Not in the, “I’m a feminist and women should run the country kind of way” though. You can throw all the scientific mumbo jumbo at me that men are physically stronger than women but my capacity to deal with the crap I’ve been handed is very high.

About two days after that, I realized that no one wanted me around. Something had gone wrong and I was getting the brunt end of the stick.

No, I’m not complaining.

That just made me work harder. I did everything I could to be as ethical and on point as a student journalist could.

In my first meeting with the Athletic Director he told me that The Channels had made the athletes look bad in past stories. That could be the fault of the sports editor or the writer, yes. The fact is that journalists are trained to report and write what they perceive as truth.

I’ve been lucky this semester.

The Vaqueros have been doing an outstanding job on every front. The football team has only lost one game and it was a close call. I am in full support of the new coaching staff as a student.

Good teams make my job easy and they make for better stories.

Today, I have earned my keep and gained the respect that I deserve. Although I haven’t won everyone over, I’m doing my best to keep it together and be the best journalist I can be.

Not just because I have to prove something as a woman, but because I love my job and I’m good at it.

Most writers that end up in sports journalism come from a background of sporting families. I happen to be the exception.

My parents aren’t exactly the athletic type. They didn’t really compete in team sports continuing after high school. My dad was a swimmer and my mom did some bike racing but that about covers it.

I came to love sports all by myself. I learned everything on my own and played catcher on my varsity softball team. Those are some of my best memories through high school. Sports saved me from a lot of lonely nights crying in my room. I wasn’t popular and I wasn’t the pretty girl that everyone liked.

Having that team around me made everything worth it.

Then I broke my ankle. I couldn’t play anymore. I was heartbroken. All my aspirations of playing softball in college and professionally dissipated in seconds.

When I came to the realization that being a sports journalist was what I wanted to do, everything fit. I got to be around what I loved and write about it.

There is no doubt in my mind that being a woman in this profession is going to be hard. I’m going to get the sexual comments and people are going to doubt me.

However, I will not let that define me. I won’t step back when someone tells me no or back down when I get a sexist slur thrown at me.

Things like that fuel me. They make me want to prove that I can be and will be the best sports journalist they’ve been interviewed by.

See you in the locker room boys.