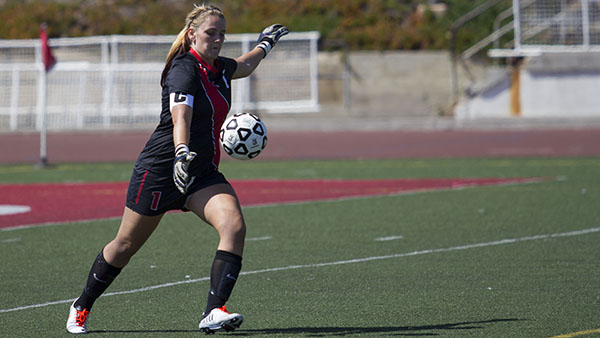 The Vaqueros set the pace from the kickoff, outplaying and outshooting the Cougars handily in the first half. With all the shots and constant pressure, however, the Vaqueros went into halftime tied 0-0. With the offense struggling to get the ball into the back of the net, perhaps some thought the bad luck of Friday the 13th had made it’s way into La Playa Stadium.

“I wasn’t too frustrated because the girls were playing well and that’s what it’s all about,” coach John Sisterson said.  “You just need a little bit of luck and the ball’s going to be in the net.”

Sophomore Forward Brandie Harris was just the one to break the bad luck.  Considering the start of the season Harris has had, it was no surprise.  Harris, a Santa Barbara native, was selected Athlete of the Week by the Santa Barbara Athletic Round Table earlier in the week after tallying two hat tricks in the team’s first four games.

Harris scored in the beginning of the second half on a beautiful give-and-go with second half substitute Freshman Jackie Holmer to break the tie.  The two would hook up again on a nearly identical play ten minutes later.

“We played really well today; passes were connecting, we were moving off the ball, making runs, crossing and finishing,” Holmer said.

The Vaqueros scored again with 15 minutes left on a goal by Sophomore Heather Rivera, with the assist coming from Harris.  The Cougars got on the board just a minute later on a superb shot from outside the penalty box by Cristina Salazar, that Vaquero keeper Sophomore Brianna Robinson could do nothing but watch as it curled in the top right corner of the net.

Robinson came up big in the waning moments of the game with a diving stop on a hard, low shot from close range to keep the score at 3-1.   The swarming Vaqueros defense only allowed 6 shots on goal throughout the match.

“I felt like we did well, but we can always do better,” Harris said.  “Being at home is definitely an advantage and I feel we play better here. “

With only five women returning from last year’s team, the predominantly freshman squad will turn to Harris and the other sophomores as the season continues on.

“Brandie is a quick little forward who is always going to get you goals.  She leads by example,” Sisterson said.  “That’s all you can ask for.  She’s full of energy and a bubbly character.”

Moving forward, the women’s soccer team look to keep the momentum going as their next four games, including the Western State Conference North opener against Oxnard, will be here on their home turf.

The Vaqueros next play September 24 at 2 p.m. against College of the Canyons at La Playa Stadium.