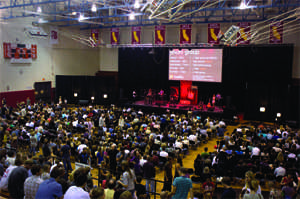 Reality Church, Carpinteria pays $13,144 for renting premises at City College once a week to hold its r services.

“They paid full commercial rate that all goes to general fund,” said Lorenzo Zwaal, risk manager and director of community services. “With the budget cuts, every bit we could put back into it really helps.”

Reality Church is renting the Sports Pavilion and the second floor of the IDC building on West Campus every Sunday to hold their service between 10 to 11.30 a.m. and a Sunday school for kids.

“Basically they outgrew their church in Carpinteria and wanted to expand to Santa Barbara,” Zwaal said.

“They first came to us [the Community Services] in April 2011 and asked if they could do an Easter service in our stadium,” Zwaal said. “Nearly 9,000 persons came, almost filling up the stadium’s capacity of 9,999.”

“We are the only place that can hold 7,500 people,” Zwaal said. “Nobody else has a big enough stadium.”

According to Zwaal, Reality Church liked the facility and location so they filled out the necessary applications to rent it on a regular basis. They then needed to have security; athletics, student life etc approve it before handing it over to the Board of Trustees. The Board of Trustees unanimously approved it on July 28, 2011.

The school does not provide for anything other than the location. The church has to bring their own equipment each week and it takes volunteers several hours to set it up and tear it down.

“The cost is really low to run this seeing how much we are gaining,” Zwaal said.

The Reality Church is not the only ones that the school is renting their premises to, there are other schools, one being Oxnard Union School District, doing the same thing.

“It is not something new and unusual,” Zwaal said.

Pastor Britt Merrick started Reality Carpinteria in 2003. They now have branches in Los Angeles, Stockton, San Francisco and overseas in London, England, and are planning to expand to Boston in 2012.

Psychology student Shayla Mosley moved to Santa Barbara from San Diego 6 months ago because of the church. She had a friend who lived here and had this amazing time at the church so she decided to try it out.

“I just fell in love; there is a lot of joy here,” Mosley said.

“At first it was like going to church at school, but now it just feels like going to school at my church,” Mosley said. “The building is not the church, it is in us.”

Inside the Sports Pavilion, the usually empty floor was filled with chairs in rows to supplement the balcony and facing a built up stage. The service started with a band of seven people playing drums, bass, violin and singing songs to praise God. More and more people in all ages arrived and joined in the singing. Pastor Britt Merrick then talked about identity and grace while the audience read along in their bibles, taking notes and making agreeing sounds. Approximately 1,500 people attended the service.

“We leave these doors today as peacemakers and grace givers,” Pastor Britt Merrick, the founder of Reality and the current pastor for preaching and vision in Santa Barbara.