Televised presidential debates can distract voters from the real issues 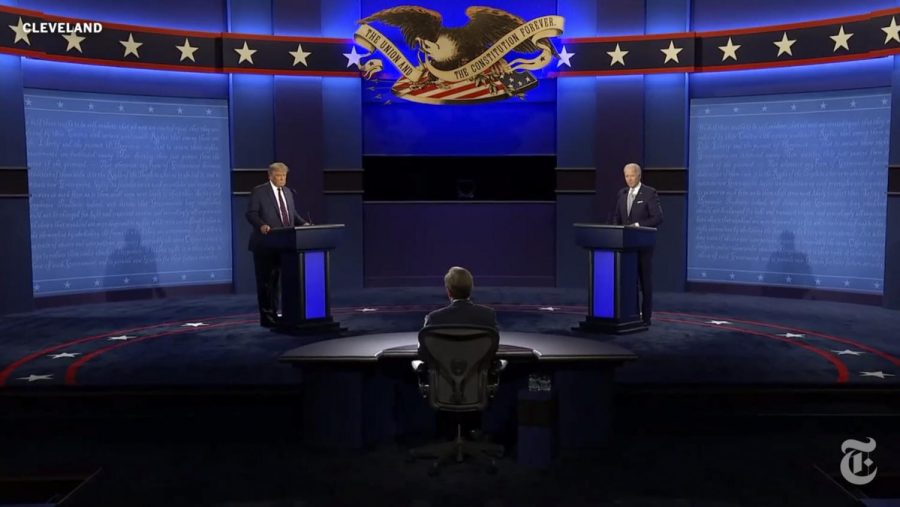 The Tuesday night debate was not only a disgrace, it was absurd.

It seems what the candidates prioritize now is public image, aggressive bravado and discrediting the opposing view—unless we do something about it.

The 90-minute back-and-forth between former Vice President Joe Biden and President Donald Trump may have seemed like endless arguing, but it was the farthest thing from an argument or debate.

A debate is by definition a formal discussion in which opposing parties present arguments for certain positions on various topics, and an argument by definition is a string of claims designed to support a conclusion, like whether or not taxes should be raised.

The conclusion from Tuesday is that the Democratic process of debating real issues may no longer be what it was originally intended to be.

Politicians are well aware of how people will react to what they see on the surface, and average voters don’t do enough research to really know how an election will affect legislation and government processes.

To be able to help shape the best possible future, the American people have to be well informed on what they want and what candidate can give it to them.

But every major election feels more like a war of personalities, where the two opponents become celebrities and the voters are fans who support their favorite team.

Their debate was the first ever to be televised in America, showcasing a vibrant and handsome Kennedy against an awkward and aloof Nixon.

Legend has it that those who listened to the debate on radio believed Nixon to have won the debate, while the approximately 70 million that tuned in to watch on TV favored the young and attractive Kennedy.

After winning the election Kennedy said “it was more TV than anything that turned the tide.”

Though Trump may never look like Kennedy, he has been conscious of his appearance and the importance of public image during his presidential tenure.

This has led to a growing number of followers who will never question his actions, and instead think of choosing a side in politics is similar to choosing a favorite brand.
But an election should carry far more weight than choosing between Coke and Pepsi.
Going into the debate, it was hard to imagine that nobody knew this was going to happen.

Journalist and Moderator Chris Wallace was all that stood between Trump, Biden and over 73 million viewers, and throughout the debate he struggled in vain for control as it slipped into chaos.

But even in a controlled setting free of interruptions and shouting,  the debate is just another chance for each candidate to repeat their campaign slogans and tell us what we want to hear. It does nothing to serve its purpose of informing voters.

Since the first debate between Abraham Lincoln and Stephen A. Douglas, the presidential debate has slowly declined to champion soundbites over genuine political discussion.

Whether they really matter has itself become debatable, but in truth approximately 10% of voters make up their minds after the debates.

After seeing both candidates’ performances on the stage, I didn’t want to vote for either.

But I remembered my responsibility to myself and to this country: To be a knowledgeable and informed citizen about what is going on, and to make sure I’m not wasting my privilege to shape the world around me.

We all have this duty to read beyond the chaos and the public facade. Both parties are based on an idea of how to run this country, and that is what we vote for—not the slander spewed on TV.

Until we start seeing meaningful presidential debates, it is up to us to figure out what policies matter most for the White House. Not to get distracted.