Skateboarding is a crime on State Street, but who does it really hurt? 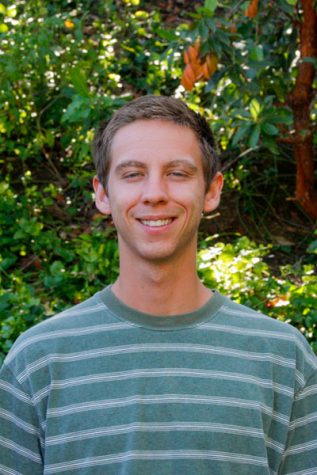 It’s the feeling of racing over scattered leaves and asphalt as four little skateboard wheels scream over each crack.

The sky has never been bluer.

It’s not even 10 a.m. yet, the air is crisp and the sun is eagerly squeezing through treetops as I skate down State Street, watching the shops slowly come to life as the doors open for the day.

Nothing but the open road before me and the bikes that cruise alongside. There’s plenty of room for everyone. But technically what I’m doing is illegal.

Since Gov. Gavin Newsom lifted some of California’s COVID safety restrictions, State Street has blocked-off access to cars so that restaurants could better take-over with outdoor dining.

The result is a long, concrete parkway where people walk up and down and dine in the fresh air.

There’s been an influx in both bikers and skateboarders there in these past weeks, but there’s a special resentment towards skateboarders that is obvious to those on the receiving end.

Before coronavirus, it made more sense.

Constant swarms of people herding up and down State Street took up every brick on the sidewalk. If you dared to speed through them, you had to know what you were doing. But someone was bound to get hit.

The Santa Barbara Police Department began to really enforce no-skateboarding laws back in 2014 following explosions of complaints and a handful of injured elderly.

The Santa Barbara municipal code states that no skateboarding whatsoever is permitted within the downtown corridor. Specifically, this refers to a rectangle bordered by Sola, Chapala and Santa Barbara Streets and sealed by Cabrillo Boulevard where the law is particularly enforced.

On a bad day a violation could send someone home with a ticket priced around $200, though many are let off with a warning.

But not everyone is just cruising through State Street. Most of what is known as skateboarding involves setting up by some stairs and going at it with jumps and grinds on these urban obstacles.

It’s a resourceful creativity that only these skateboarders understand.

Boards fly out from bailing skaters—skidding across concrete—and pedestrians can find themselves in the way, sometimes catching a board to the shin.

But at the end of the day it’s about respect.

Resentment is sewn towards skaters when they seem oblivious about hurting pedestrians then brush it off as not a big deal.

Parent’s don’t want to see that happen to their little kids either.

After meeting up with a friend that summer morning on State Street, he told me how a woman had scoffed at him for “not knowing the rules.” It didn’t matter that he was rolling at two miles an hour.

We didn’t receive a ticket, but it still felt like we were being condemned or looked down at by people sharing the same space as us.

I think people should relax a little. Everything is trivial when you’re speeding across the earth on a tricked-out plank of wood enjoying the day. Those on a bike or a skateboard should be welcome to enjoy the open space.

The open street is like an open field for skateboarders—owned by no one—and at the end of the day we are just crazy-eyed kids having fun.