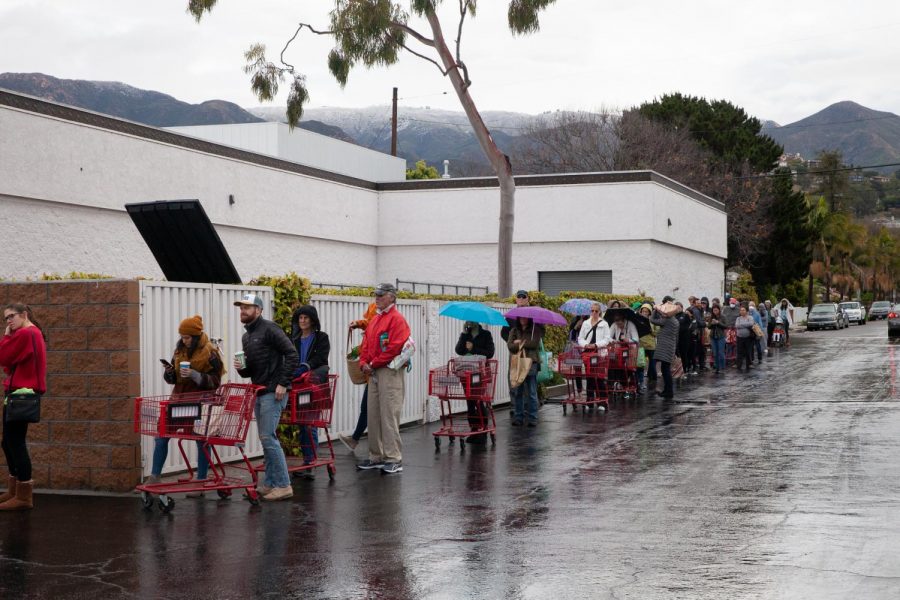 Shoppers line up around Trader Joes’s to prepare for social distancing as the grocery chain limits the capacity of shoppers from 10-25 at a time on Tuesday morning, March 17, 2020, at Trader Joe’s on N Milpas Street in Santa Barbara, Calif.

It was my first job, I applied when I was 16 and I’ve been there ever since. What I thought would be a summer job I’d hold on to for some extra cash turned out to be the place where I would meet some of my closest friends.

And I can confidently say, even after all these years, I’ve never seen anything like what COVID-19 is doing to our store.

The first few days of initial panic were exciting, albeit chaotic. There was no system in place, and the shelves were bare by the time I clocked in for my closing shift at 2 p.m. All ten registers were typically open, about seven people deep until around 6 p.m., and after that it was dead.

There was no product for any of us to work, nothing to do except deep clean, which the entire crew did in bulk. I don’t think there’s a square inch of that store that hasn’t been disinfected.

It came to the point where if a customer asked if we had a certain product in the back, the default answer would be “if it’s not on the shelf, we’re out.”

It became clear that something would have to change. The closing crew would consistently finish closing tasks before the store was even closed.

Eventually, the over-buying led to a change in “trading hours” for an indefinite amount of time. A significant change, three hours of business lost to the wind.

The empty shelves day after day became a bit ominous, and things were bleak.

Each day the virus’s reach stretched further, with each development meriting a new guideline for our store.

To aid the nationwide push for social-distancing, we limited the amount of customers in our store to around forty, keeping a line at the front of the store.

Every time a customer exited, someone would be allowed in.

Once in the store, every other register would be open- the one next to it being subject to a deep clean, switching every hour.

At first, I thought that this new system would cause pandemonium and even further panic.

The front of the store almost resembled a theme park. The line of customers eager to do their shopping, unaware of the disappointment that would meet them as they realized that we too were out of toilet paper, wrapped around the block.

To my surprise, the change went over as smoothly as could be asked for.

One night after hours, we all went outside and traced each other’s feet in sidewalk chalk six feet apart to help remind shoppers to keep a healthy distance between one another while waiting in line.

Never in my nearly four years of working at Trader Joe’s had I been consistently thanked for doing my job.

This isn’t to say that on any other day patrons were rude, it’s quite the opposite honestly.

But the constant smiles and friendly remarks made me realize the difference that companies like Trader Joe’s were making during this crisis.

Suddenly, our tasks seemed much greater than directing customers to the frozen aisle for some pre-made pie crust.

It made me feel like me and my fellow crew members were a part of something much larger, keeping the cogs of society turning while Americans across the country were sheltering in place.

Service workers like grocery store employees are often written off as unskilled, but in a worldwide event like this, they’re listed as “essential.”

It’s time for that idea to change.

Maintaining a safe and calm atmosphere in a place as imperative as a grocery store during a global pandemic is a skill, and it serves as a microcosm of society that is still functioning more or less the same.

As we all got used to these new rules and guidelines, a bit of normalcy began to return to Trader Joe’s.

Buying limits on items meant items on the shelf and product to work. A full shelf of apples was a sight for sore eyes, a reminder that the bare aisles signifying end times just days before weren’t permanent.

Who knows how long all of this will carry on.

And at the end of the day, we’re just another neighborhood grocery store.

But working through all this has given me an appreciation of the work we do beyond selling boxes of cereal, and it’s weird that it took a deadly disease to point that out.