If a woman wants to play baseball, she should be able to 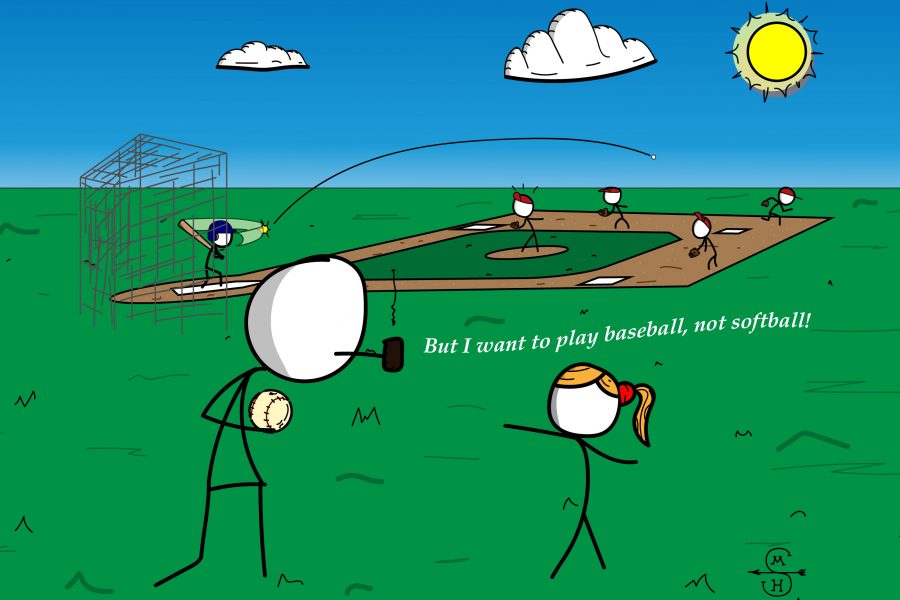 Every time you turn on ESPN to watch a Major League Baseball game, without question you will see a team full of men take the field.

Most people reading this will think ‘so what?’

But that is exactly the problem. It is widely accepted in the United States that baseball is for men, and softball is for women, but why?

In the late 1800’s women were playing baseball at the collegiate level, and even against big time players like Babe Ruth and Lou Gehrig. But in 1952 women’s contracts were completely banned in baseball.

The fact is: even though women had been playing for just as long as men, when professional baseball became more mainstream, women were pushed out and forced into softball.

In a breakthrough article titled, “Is Softball Sexist?” writer Emma Span listed some of the reasons given as to why women were no longer allowed to play.

“…Girls’ bones were weaker than boys’; that facial injuries could ruin a girl’s looks and therefore prospects in life; and, most outlandishly, that girls struck in the chest by a ball might later develop breast cancer,” she said. These are just a few of the ridiculous excuses used to keep women out of the diamond.

“One Little League vice president expressed his concern that coaches would not be able to ‘pat girls on the rear end the way they naturally do to boys,’” explained Span. Although these ideas seem old-fashioned compared to today’s ‘girls run the world’ culture, nothing seems to be changing.

Softball was intended to let women feel equal to men without any equality actually being enforced. It was designed to be the “easier” version of baseball, hence the larger ball, use of underhand pitching, altered rules, smaller field and fewer amount of innings.

Basically softball was created by a male-dominant society to say, “Sure sweetheart we will let you play, but in a way that is much more guarded so you won’t get hurt.”

In an attempt to create more gender equality in the school system, including sports, a law was put into place as a part of the Education Amendments Act of 1972 that stated “No person in the United States shall, on the basis of sex, be excluded from participation in, be denied the benefits of, or be subjected to discrimination under any educational program or activity receiving Federal financial assistance.” While this was supposed to lead to complete gender equality within school sports, there was unfortunately a large loophole when it came to girls playing baseball: in our society softball is unjustly considered an equal alternative to baseball. So a girl would legally be allowed to play baseball for her school only if the school did not have a women’s team available, also known as a softball team. Not to say that softball isn’t a physically and mentally demanding sport, it just simply is not a fair equivalent to men’s baseball.

On the rare occasion a girl is allowed to play baseball in middle or high school, it is usually widely discussed. People say it’s incredible that a girl has managed to ‘hold her own’ on a field full of boys. While it is good to shed light on cases like these, it is also further widening the gap between women and baseball. Each time a woman who was “allowed” to play baseball is made to seem like a huge exception, it is a disgrace to the impressive amount of women who can compete well in the sport.

As a little girl I played co-ed Little League Baseball and was better than most of the boys on my team, but as I got older it seemed less and less acceptable for me to play alongside the boys. I was slowly edged out and ultimately pushed into joining a softball team instead; being told that there was no future for me in baseball.

This was not because I was incapable of playing the sport, I had proven myself on the field. It was just the social norm stopping me. After Little League, boys went on to play baseball and girls went on to play softball, and no one, myself included, ever thought to ask why.

Although some international progress has been made in the past couple years regarding the idea of women in baseball, it still for the most part unheard of in the United States. Even if a girl is told that she can play, she often won’t for fear of ridicule. You can research for hours trying to find a valid reason for this unjust divide, but when it comes down to it the only thing stopping a woman from playing for the L.A. Dodgers is not her ability, it is sexism.

At some point we need to step back and realize there is nothing equal about baseball and softball. They are, in fact, completely different sports.