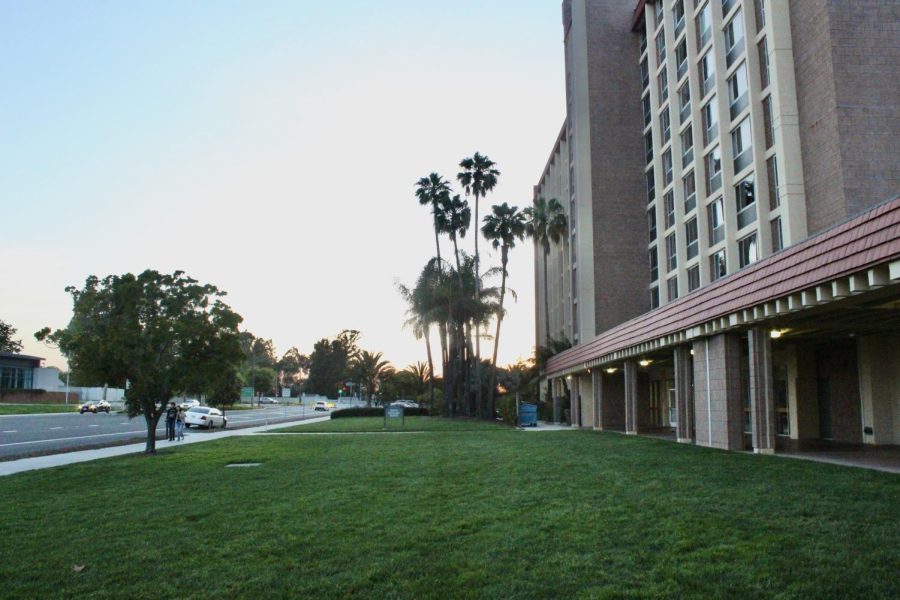 The UCSB Santa Catalina dorms on the evening of April 1, 2022 in Isla Vista, Calif. Multiple attempted kidnappings have recently taken place on the corner outside the hall on Storke Road and El Colegio Road. Student Annabelle Mersman said she feels less safe around her resident hall. "I limit my time outdoors," Mersmen said. "I don't get that breath of fresh air anymore."

A man broke into a City College student household on January 18 at 4:45 a.m. exposing himself in front of two sleeping residents, prompting them to wake up to an indecent stranger in their home.

Channels staff writer Ally Budde and roommate Mailan Nguyen were victims of a sex crime, leaving a lasting impact as they presently follow the case of the suspect.

“I woke up to him pulling the covers off of me while I was sleeping,” Nguyen said. “It took me a few seconds to process what he was doing, I was too scared to speak.”

Still in shock, Nguyen whispered Budde’s name, prompting her to wake up and yell “Dude, put your d-ck away and get the f–k out of here.” He ran away immediately and the police found him down the street.

In Nov. and Dec. of 2021, there were 102 reported violent crimes in Santa Barbara according to the Santa Barbara Police Department Compstats. The rise in crime rate and assault has affected students’ mental health. Nguyen said that situations like this don’t just go away when the person is locked up.

“Now I don’t feel as safe as I should in my own home…I have to pay extra attention to make sure men aren’t breaking into my room while I’m asleep.”

On Feb. 28, several attempted kidnappings occurred outside of the UCSB Santa Catalina dorms on the corner of Storke Road and El Colegio Road. All four incidents were allegedly tied to one suspect who was arrested on March 5 by Santa Barbara County Sheriff’s Office detectives.

Jenna Brunton, a student residing at the Santa Catalina dorms, said that after the kidnapping attempts she was more fearful and anxious, causing her to change her habits in order to protect herself.

This type of story is not uncommon for an Isla Vista resident. Many people are affected by theft, petty crimes and other assaults. Locking every window and door, and carrying defense weapons has become a common procedure for protection while fear festers about what is happening on the streets.

“I remember in the span of what seemed like a week I got notifications of shootings, sexual harassment and assault,” said City College student Clarissa Perez.

After a spiral of danger that has seemed to cascade in a matter of weeks, students have become more vigilant and fearful, not only of the crimes themselves, but the lack of response driven by authorities.

On various social media platforms, students anonymously circulated images about the skewed priorities of the authorities, saying the threat to safety was not treated rightfully for its severity.

“If anything, the local sheriffs make me feel more unsafe because of the way they treat the people in Isla Vista,” said City College student Julia Beehler.

Parents have formed groups to voice concerns about the safety of their children while hundreds of students from both City College and UCSB have been directly or indirectly affected by crimes in Isla Vista.

In efforts to ensure safety, there are many resources available.

The Isla Vista Foot Patrol has increased surveillance over certain areas and escorts are available for anyone who feels unsafe. Every couple of months the sheriff’s department holds a public meeting open for questions and concerns.

At City College, there are emergency phones spread out on campus and safety escorts are available. For students looking for support, The Well is open for counseling and other basic needs.

It is recommended to take every precaution in order to stay safe and to contact authorities with any concerns.