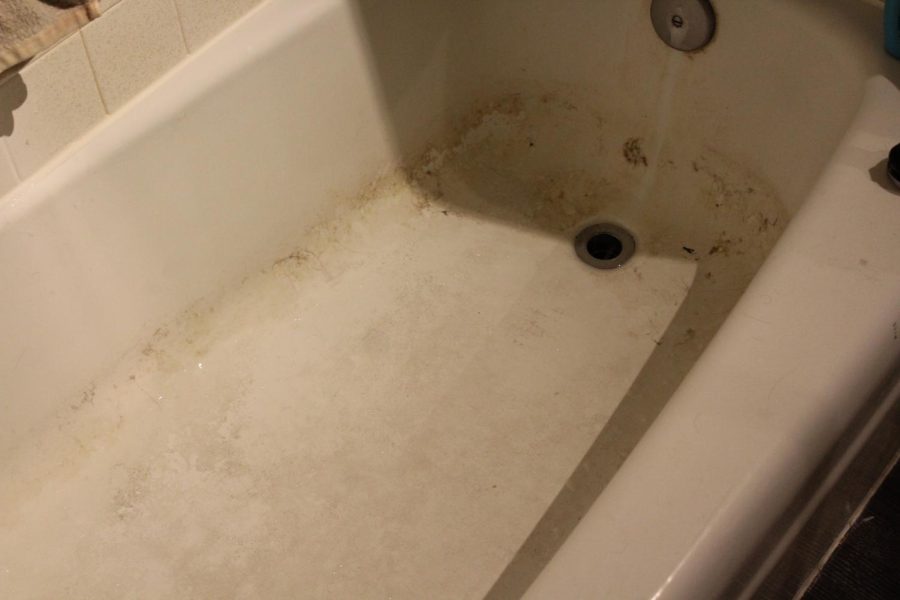 Black mold grows in the bathtub of one of the units at the Beach City student housing complex on Friday, Feb. 25 in Santa Barbara, Calif.

At first glance on their website, Beach City apartments are presented as a tropical retreat for incoming City College students conveniently located right off of campus.

However, current residents have complained to maintenance about an array of issues that have yet to be resolved.

Beach City is a student complex located next to the City College campus, owned by local developer Ed St. George. City College students living in Beach City have filed multiple complaints regarding mold and other aspects affecting their quality of life.

Recently, students living in the complex have been reportedly getting sick due to black mold growing in their apartments.

“Every time we report mold, management comes and paints over it,” said Milo, a current Beach City resident.

According to Milo, they and their roommates started getting sick with a wet cough around November, just a few months after they moved in. After finding mold in the shower and bathroom area, Milo put in a maintenance request in early December.

To file a maintenance request, residents use an application called AppFolio, an automated system where they can report issues having to do with the apartments.

Milo said that after they reported the mold, maintenance came in to take a sample but they never saw them “physically swab where the mold was.” According to Milo, after management took the sample, they told them that they would have the results in 48 hours.

On Dec. 6, management sent them a picture of “a petri dish with nothing in it and said our test came back negative,” the tenants said.

“All of us were sick for three months,” said Sarah Komdas, another Beach City resident.

Komdas said that she and her roommates began to get sick around October, and started to notice the mold reportedly growing in their bathroom. She added that multiple maintenance requests were submitted, but no one ever came.

Similar to Milo’s case, Komdas performed her own mold test, which came back positive.

In the opinion of the Beach City residents, getting charged by management is another recurring issue they face.

“It’s very obvious that the management is only after charging you,” said one of Milo’s roommates, who requested to remain anonymous.

Milo explained that there was an instance in October where they were charged $50 each because they left a towel hanging on their balcony overnight. According to Milo, management said that they were charged due to “visible clutter.”

Komdas said she has also been charged by management for having items on her balcony. She and her roommates have been charged $400 for “having chairs on our balcony,” she claimed.

Additionally, there have been complaints about appliances being broken or not functioning in general. “Our dishwasher barely works, it leaves white powdery stuff all over the dishes and we normally have to wash them twice,” said Jet Moxley, a current resident of Beach City.

Moxley also said that when he moved in, a mirror in his living room was already broken. According to Moxley, when he put in a maintenance request to get his mirror fixed, management came in and put tape over the crack.

The Channels reached out to Ed St. George for comment through email and by phone on multiple occasions over a three-week period and did not receive a reply.

“Don’t move into Beach City unless you’re willing to deal with all of the problems that come with it,” Komdas said.