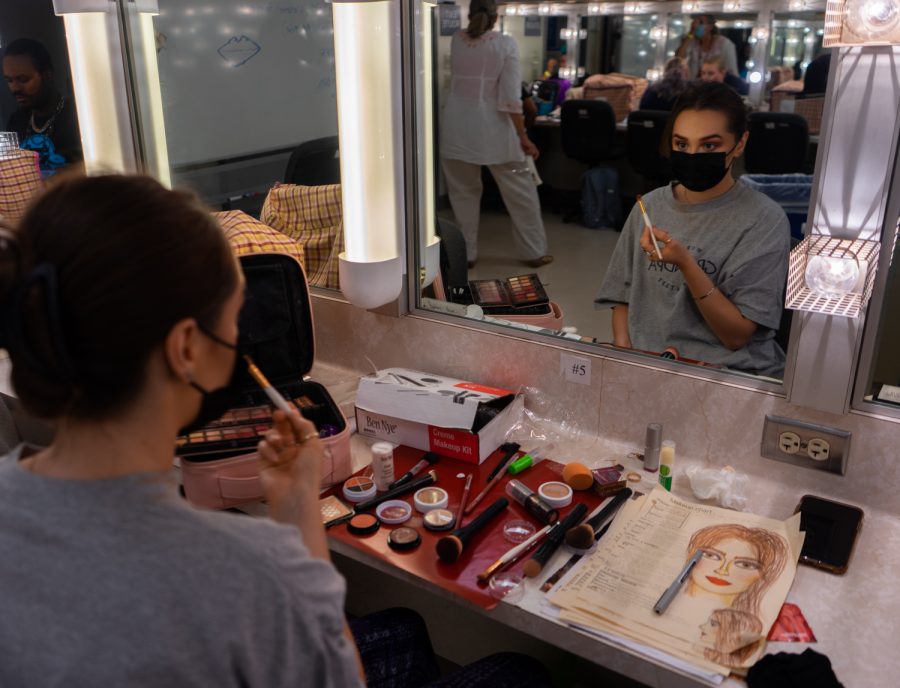 Stephanie Brown applies make-up around her eyes during Theatrical Make-up class on Sept. 8, 2021 in DM130 at Santa Barbara City College in Calif. The students draw out the final design on paper first, then apply it to themselves.

City College received the largest donation in its entire history from philanthropist MacKenzie Scott, who gifted $20 million to the City College.

Normally, donors have specific requests on how to spend their contributions. This particular donation was fully unconstrained, with the one caveat that the money is fully used for the students and not locked away.

“That’s why that kind of gift is so rare and vulnerable, not just because of the size but because it was completely unrestricted,” said SBCC Foundation CEO Geoff Green.

The flexibility the money brings is as important as the size of the gift, as it follows Scott’s philosophy of the institution knowing best what it needs.

Scott’s motivation was to support two and four-year institutions “successfully educating students who come from communities that have been chronically underserved,” she stated on June 15 via her blog.

Although the criteria for the selection of schools have never been announced, Green is certain, “That was because we had done something to really support students that were mostly excluded. We’re talking about students of color, first-generation college students, students coming out of poverty or students who are already single parents.”

Compared to previous donations, the $20 million has potential to open up completely new opportunities for the college, depending on how the money is spent.

However, people seem to underestimate the amount of money City College would need to fully finance all of their programs, Green says.

“It’s funny. When big gifts are made, people have that instinct – that might be human nature – to go do stuff and makeup something to spend it on.”

Green assures the first priority will be to put the money into already existing programs that need financial support. He wants to look at why the college has been given the money and make sure those things are solid, sustainable and fully funded.

The biggest part of the donation – over 50% – will be saved for future generations or emergencies.

In her posts, Scott explains educational success should not be based on origin, race or wealth, which is exactly the kind of disparity she tried to address with her gifts.

Scott believes the donation represents not only new opportunities and changes for City College but should be seen as a statement against social inequalities.