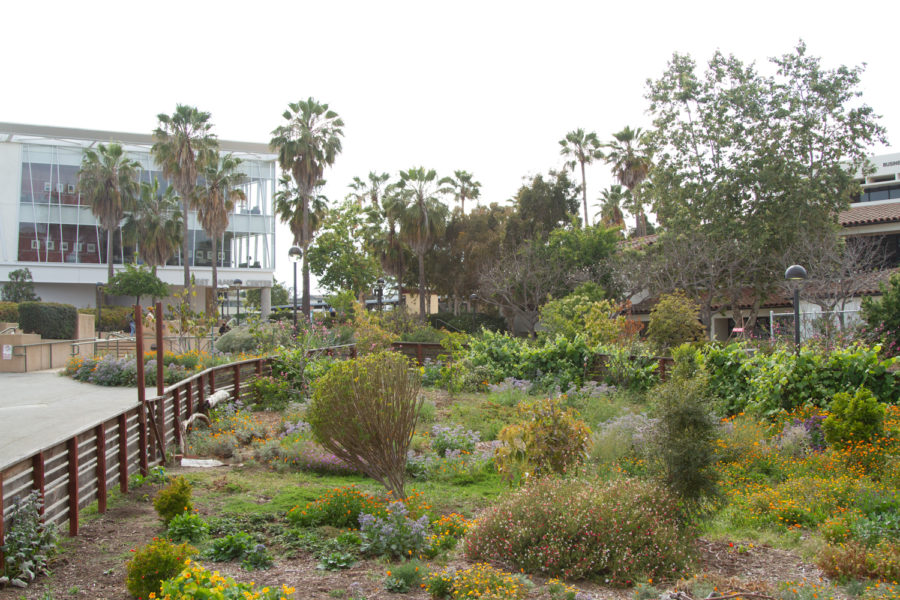 The SBCC Permaculture Garden sits amid a mostly empty campus on Thursday, April 22, 2021, at Santa Barbara City College in Santa Barbara, Calif. A $100,000 grant from the Environmental Protection Agency provided funding to sustain the garden and to launch the Ecological and Edible Garden Project with local nonprofit Explore Ecology.

A $100,000 grant from the Environmental Protection Agency may have saved the permaculture gardens at City College for another year or two, as they become a part of a local effort to unite the community through ecology.

The SBCC Permaculture Garden on west campus began as a student-led effort to transform an underused lawn section into a community project. It received funding and support from leaders when it started around 2015, but it has since struggled to maintain support.

“At the end of this EPA grant, there’s no money left. That’s it,” said Adam Green, professor of environmental studies and founder of the Center for Sustainability.

Green said he was surprised they received the grant—the largest ever awarded to an organization in Santa Barbara. He owes it to collaboration with other groups who were also seeking the grant and the “really strong message” and goals they put together.

It was officially awarded to the SBCC Foundation and local nonprofit Explore Ecology to create the Ecological and Edible Garden Project—an initiative to connect a handful of local gardens while promoting environmental education and repopulating native plants and pollinators.

“The grant I think will help catalyze this network,” Green said.

Instead of trying to restore native habitats, organize events and gather resources on their own, Green believed they’d be stronger in collaboration.

“There’s just so many ways we can educate each other,” he said.

Most of the money will focus on expanding the garden project and creating educational resources, like YouTube videos, workshops and live events. But a percentage is needed to maintain the City College gardens and pay the student workers.

“I’ve been largely funding it since it started,” Green said. “It’s a lot of volunteer hours.”

As the college wrestles with a lingering budget crisis, Green said today’s leaders are going to have to decide if the club and the gardens are worth funding.

“It’s not just a garden that takes up space,” Green said. “It has benefits. It’s a million different things.”

The permaculture garden is a key example of the goal of the Ecological and Edible Garden Project. It provided fresh food to the SBCC Food Pantry, united students through education and was a habitat for native species.

Geography major Gabriela Espiritu, 21, first started helping out for extra credit in one of Green’s environmental studies classes about a year and a half ago.

“I loved it so much that I continued for a while,” she said.

Although the garden thrived off of student volunteers and club members, Espiritu is one of the two paid student workers in the garden. She had to leave back in March when the pandemic hit, but has been back since December.

“I was so bummed, everything was just starting to bloom,” she said. “Everyone really enjoyed it, we were really building a community.”

The garden project is also about conducting experiments on sustainability, and Espiritu is helping the botanic gardens with research on the population of native bees—a key pollinator.

As the world continues to battle a changing climate, Green imagines a resilient community that revolves around sustainability and partnership.
“It’s your neighbors who you depend on,” he said. “If we want to build a sense of place … those gardens did that.”
Ecology is about understanding and improving systems, and the garden is a great way to get people outdoors and interacting with each other and with nature, he said.

“There’s an old permaculture saying that you can solve all of the world’s problems in the garden,” he said. “The garden’s a tool, it’s our tool to do this.”