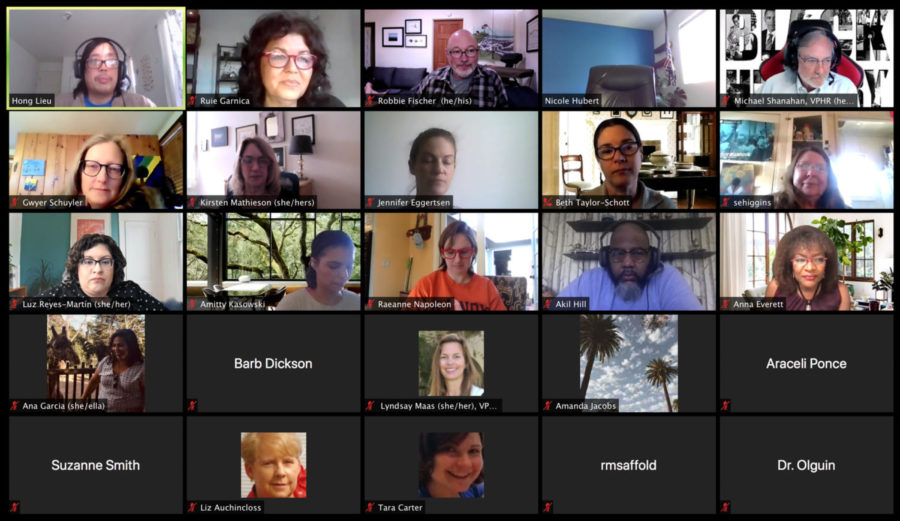 Webmaster Hong Lieu (top left) co-chairs the Campus Climate Advisory Committee Town Hall on Feb. 25, 2021, over Zoom. Lieu recently visited the Associated Student Government to give them ideas on how to start a student-led town hall and offer a space to focus on student-centered concerns at City College.

The creation of the student-led town hall, headed by the Associated Student Government, is currently on hold while senators try to administer a survey to gauge the online student learning experience.

The ASG wants to send out the survey to hear from students about their experiences online and the difficulties they’ve faced during the past year. The responses will also be discussion topics at the student-led town hall that will follow.

ASG President Carson Mitchell said their goal is to have the town hall the week before finals.

Not many students speak at the current town hall hosted by the Campus Climate Advisory Committee, which tends to focus on issues mostly faced by employees—though they ultimately have effects on students also.

Mitchell said that he can’t speak for individual problems students have, but many students may be experiencing similar problems.

“In a general sense I think a lot of issues in virtual learning might arise,” he said, “communication between professors, deadlines, course layouts.”

Senators are waiting for approval from various departments of their plan to offer financial incentives to students for taking part in the Virtual Learning Climate Survey.

Some senators hope the money will get more students to show up, leading to more-accurate survey results. While some think they should send it out anyway in the interest of time.

“I know how it’s going to go, we’re going to put out the survey and get like five to 10 responses,” Mitchell said at the April 16 meeting, “unless there’s something to be offered.”

Mitchell said that the senate is looking to collaborate with the Campus Bookstore to offer credit to 10 randomly selected students who participate in the survey. Providing financial aid requires many governing bodies to approve and can take a long time to process.

“When we want to offer financial incentives, we’re kind of left dependent on a lot of other departments,” he said.

Only a few weeks remain in the semester, and the board wants to get the survey out as soon as they can.

“As soon as we hear back, we’re sending out the survey,” Mitchell said.

The senate has been planning the survey for some time now, and the hang-ups have caused other senators to question the necessity of the incentives.

Student Trustee Lilli McKinney said she’d rather get the survey out without any reward tied to it than not send it out at all.

“I think if we have to we should just cut it out,” she said in the April 16 meeting. “I don’t want to wait too long.”

ASG Student Program Advisor Amy Collins said it could be worth it to send out the survey before it’s too late.

The senate and their respective subcommittees planned to continue the discussion into next week during special meetings. They have a scheduled regular meeting on Friday, April 23.