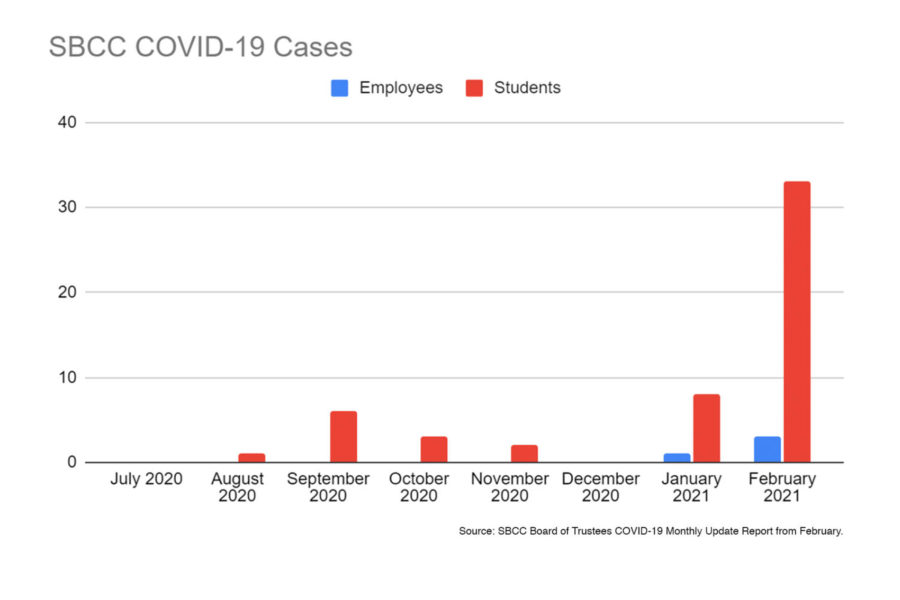 There has been a sharp increase in reported COVID-19 cases at City College for the month of February. Source: SBCC Board of Trustees COVID-19 Monthly Update from February.

Student COVID-19 cases at City College hit an all-time high of 33 in February, a sharp increase from the January total of eight.

The February COVID-19 Monthly Update Report stated the cases were across a variety of classes being held in person. Though over 600 students are in face-to-face courses, “none of the transmission occurred in any of the classes,” said physical education department chair Kathy O’Connor.

City College nurses and athletic trainers tracked where the cases developed, and most were traced from people who had left Santa Barbara and were returning after the holidays.

“The standard is, if you have three positive cases in any one group, then you need to quarantine for two weeks,” O’Connor said.

The protocols from the COVID-19 Prevention and Response Plan were executed after both the baseball and football teams fit the criteria to be quarantined and subsequently shut down in-person classes for two weeks.

One way City College has worked to prevent transmissions on campus is through the use of an app called Healthy Rosters, which was purchased in the summer of 2020.

“Students answer questions before they ever come to campus, and they have to get a green check on their app to show that they can come to La Playa,” O’Connor said.

The college has also implemented surveillance testing to monitor COVID-19 cases within students and faculty.

“50% of a group gets tested every two weeks, and we aren’t letting anyone in the classes or staff come to campus without their negative test,” O’Connor said.

The protocols requiring tests and mandatory masks have been “very, very well managed,” she said.

Superintendent-President Utpal Goswami echoed O’Connor on the execution of the prevention and response plan.

“We have a very robust COVID plan with protocols to follow,” Goswami said. “I interface with them on making sure the plan is up to date and they are following the plans.”

City College has worked with California state and Santa Barbara County public health guidelines, and have used those as a benchmark.

Goswami said that the February cases were brought in from outside of campus and were “out of our control,” and the rise in cases is a “one-time spike.”

The next report will factor in Spring Break. Students were encouraged in an email by Dean of Student Affairs Paloma Arnold to avoid gatherings and travel, stay where located and continue to observe all public health guidelines.

“We’re really paying attention now to Spring Break, but we haven’t had any positive cases in weeks,” O’Connor said.

As case numbers continue to drop throughout the state and are starting to drop again at City College, the potential for a return to campus during the fall continues to increase.

“Our plans for fall are still a 40% in-person instruction, and we will abide by what the guidelines will be in August,” Goswami said.