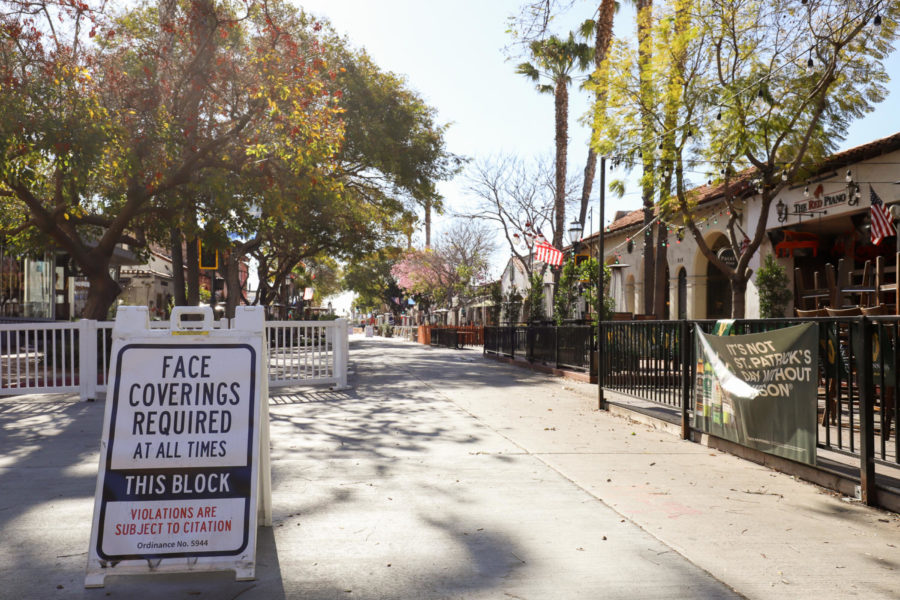 State Street has been turned into a pedestrian promenade with the goal of bringing business back for the local shops, restaurants, and bars. File photo of State Street on March 15, in Santa Barbara, Calif.

The city transformed State Street into a promenade with the goal of helping local businesses during the pandemic.

The State Street Promenade website launched on August 26, 2020 to provide visitors with information on the new outdoor mall.

During the pandemic, several businesses have suffered with fewer people shopping. The city of Santa Barbara decided that closing down State Street to cars would allow more room for outdoor dining, giving businesses a better chance at success.

“The only appropriate action was to allow businesses to survive,” said Peter Rupert, director of the Economic Forecast Project. “[It] wouldn’t have happened if there was no outdoor dining.”

The Economic Forecast Project was designed to provide information on economic trends for the Santa Barbara community using a collection of statistical data.

The State Street Promenade spans between the 500 through 1200 blocks and the 0 block of West Victoria Street, leaving out the 400 block to allow emergency vehicles to get from the beach to downtown.

This decision has resulted in an uproar from businesses that are not getting the same opportunities for foot traffic as the businesses within the promenade, District 3 Councilmember Oscar Gutierrez said.

While the promenade has become increasingly popular with people enjoying the ability to eat and shop in a designated pedestrian area, it is not without conflicts.

There’s disagreement over whether biking should be allowed on the promenade.

State Street has long been a biking hub in Santa Barbara.

There has been an increase in older generations’ complaining about young people, primarily people of color, riding bicycles, Gutierrez said.

“People were irate that they painted partial green stripes at the intersections to indicate that bicycles are going through there,” Gutierrez said. “They’re asking us to arrest bicyclists that go down State Street.”

Some of these bicyclists perform dangerous stunts that aggravate pedestrians walking on State Street, said Gutierrez. He brought these concerns to the Santa Barbara Police Department, who said they didn’t want to criminalize children for riding bikes.

A majority of people and business owners want it to stay as the newly transformed promenade even as pandemic restrictions begin to lessen.

“I really hope it lasts forever,” said Guido Oppizzi, owner of OPPI’Z Bistro and Natural Pizza. “The pandemic is going to end, but our lifestyles that resulted from the pandemic are not.”