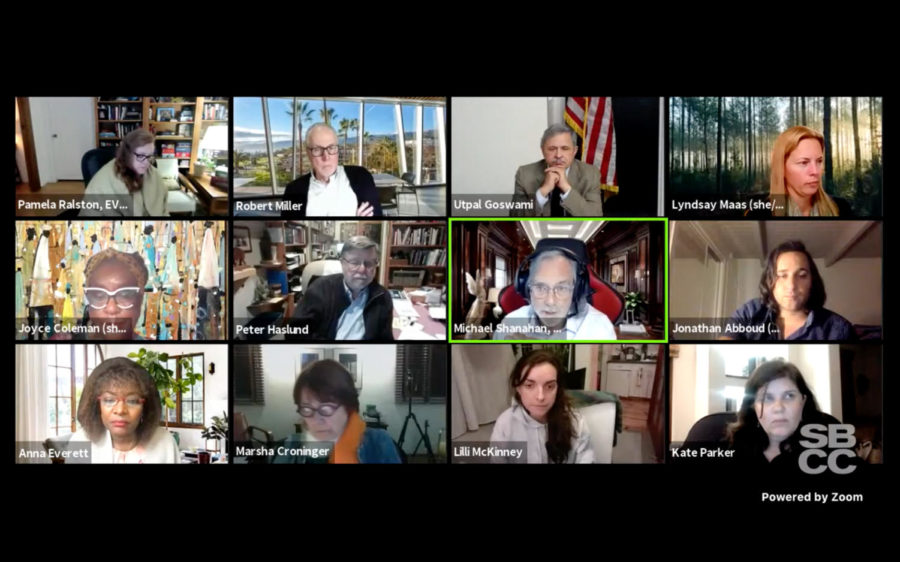 The chair of the Board Policies and Administrative Procedures (BPAP) Committee Michael Shanahan walks the Board of Trustees through the revisions to BP 3052 at the Board of Trustees meeting on March 11, 2021, over Zoom. BP 3052 is a board policy that explicitly prohibits inappropriate student-employee relationships at City College.

The implementation of a new board policy prohibiting inappropriate student-employee relationships will be delayed by at least another month before it is accepted by the board.

The Board of Trustees discussed the policy at its meeting on March 11 for the first time since October. It has been reworked by the Board Policies and Administrative Procedures (BPAP) Committee nearly nine times, along with other governmental bodies and committees who have offered suggestions.

Trustees Marsha Croninger and Jonathan Abboud drafted the initial policy last year, but this is the first time the board has seen any of the revisions.

“First off, there’s a lot of excellent work that went into this,” Croninger said. “Thanks to everyone.”

Upon reading it over and discussing it with Abboud before the meeting, she said there were still a few changes that could be made. She wanted to bring the policy back, but only after the board heard the concerns and agreed that they would be necessary.

“So it would add one extra meeting of process, but I’d like to get more back and forth out of this since we don’t all have everything in front of us,” Croninger said.

The chair of BPAP, Michael Shanahan, was there to walk the board through the policy, and said the committee’s goal with revisions was to add more background context and explicit guidelines. The committee wanted employees to know why the policy was being put in place and the “dangers” of the prohibited conduct, even for off-campus and otherwise legal behavior.
“We really struggled with not wanting to interfere with peoples’ daily lives, but draw the line for where there is potentially negative impact on the college,” Shanahan said. “Did we find the perfect balance? I’m not sure, but I think this was the committee’s best work on that.”
Among the specific changes, the committee removed a rule that would enforce the policy between students and employees for up to two years after a student had left City College.

Shanahan said they were uneasy about disciplining “otherwise legal behavior” during that period of time where the relationship to City College wasn’t as relevant anymore.

The committee also refrained from saying that employees “shall report the allegation” to the college if they suspected another employee of breaking these rules, and replaced it with “are encouraged to.”

“The committee felt that that could potentially lead to a number of false claims, misperceptions and a really kind of suspicious and hostile work environment,” Shanahan said.

Finally, they clearly outlined that any employee accused of breaking these rules would still be allowed their due-process rights.

Croninger explained where she wanted a few words added to the policy that were overlooked, and Shanahan agreed with the suggestions, but the policy would have to go through the process before any official changes are approved.

Board President Peter Haslund suggested Croninger submit her changes on a document to BPAP, and they could confront the policy again at the next meeting, and trustee Robert Miller agreed to take another first look at the board’s next meeting.

“It sounds like maybe a bunch of those revisions, Michael and his group won’t have a problem with, then we can zero in on where there may be differences,” Miller said.

The board will review the policy at their next scheduled meeting.