Sharks seen off Isla Vista beaches are friendly, should be ‘zero fear’ 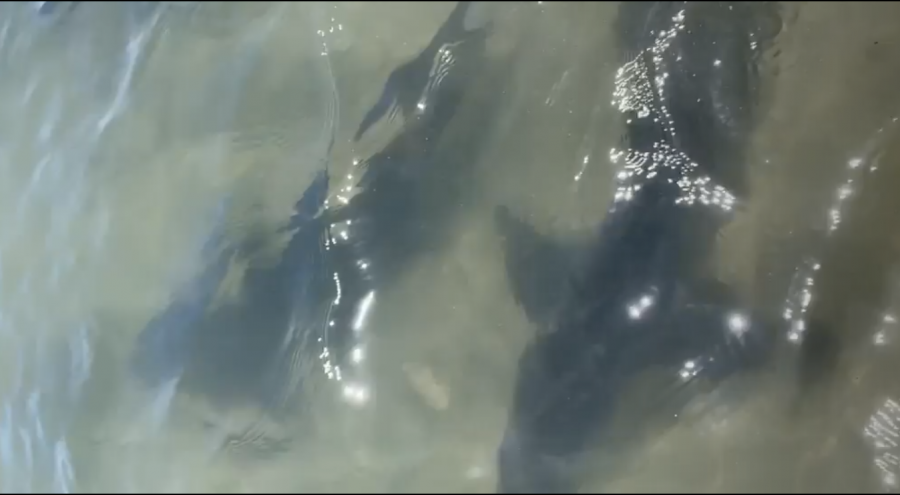 Isla Vista beaches are home to a vast variety of marine life, including the friendly leopard sharks, which have been seen more frequently in the past weeks.

From Oregon to Baja California, leopard sharks safely inhabit pockets of the California coast. In one of the coastal pockets, you will find these sharks finding refuge in the shallow waters of the Santa Barbara coast, including Isla Vista beaches.

“It’s actually one of my favorite things to do on a cold day during a really high tide to go out freediving at Deveroux and see them,” said Michelle Paddack, Marine Biology teacher at City College.

In Isla Vista, leopard sharks can be seen by surfers and beachgoers wading in the shallow waters from Devereux beach all the way to Sands beach.

Leopard sharks have always been residents of Santa Barbara’s waters. They are not in the same place for long periods of time, and travel many miles up and down the West coast.

They are often seen by surfers, but are harmless.

“These sharks are not affected at all while swimming in the shallow waters. They are adapted for waves, noise and people,” said City College Zoology teacher Hisaya Fukui. “There should be zero fear of leopard sharks; they are very important members of the sandy beach community.”

There is not much understanding of how the sharks choose where they inhabit, but they can be seen fairly often, especially during the breeding season from April through May.

Leopard sharks are ectotherms, meaning they are unable to naturally produce body heat like mammals, which is why they swim in the warm shallow water to help retain body heat.

The sharks usually found swimming in shallow waters are females.

“What these females are doing is hanging out in shallow water warming up,” Paddack said. “It’s going to help support the development of their babies.”

The warmer water speeds up the shark’s metabolism, which helps them give birth quicker and produce stronger offspring.

Their mouths are oriented on the bottom and they don’t have big jaws like normal sharks. Unlike the well-known great white shark, leopard sharks are designed to suck clams, worms and crabs and fish off the ocean floor.

It is extremely rare to be bit by these sharks, said both Paddack and Fukui.

“I have seen the sharks at Sands and usually while surfing I move somewhere else so I don’t pass through them,” said Jeshua Carrillo-Ortiz, City College student. “They’re cool.”

Many visitors at Deveroux beach have encountered these sharks while surfing. Some students have chosen to give these sharks space and to find alternative places to surf, while others have found that surfing through them is safe.

“They just want to hang out, and even if they wanted to hurt us they couldn’t because their mouths are on the bottoms of their heads,” said Joseph Kolda, UCSB student.