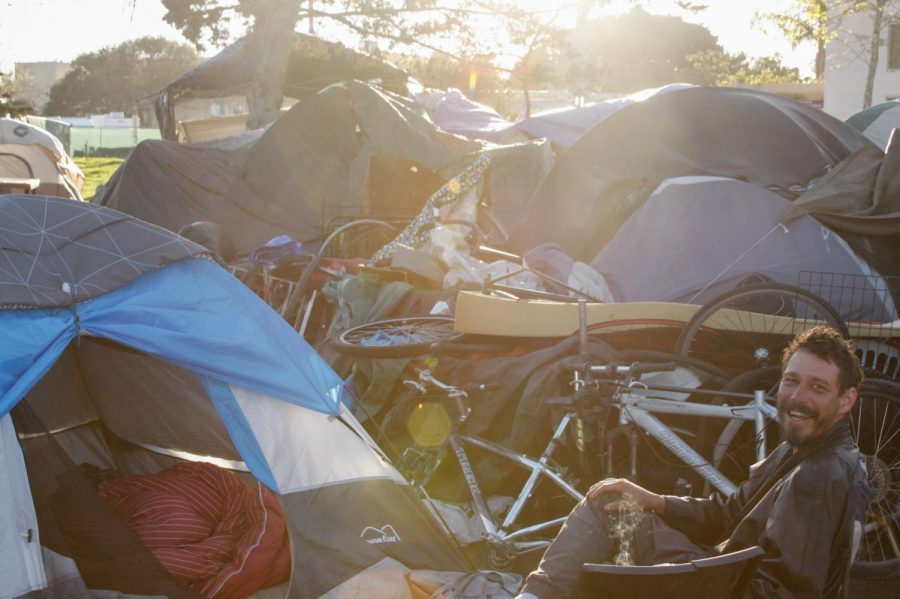 Bernard Farwell sits and smokes a cigarette while he explains what it's like to live in one of the Pallet tiny homes on Feb. 19, 2021, in Isla Vista, Calif. Although he is one of the few clients in the tiny homes, he likes to sit at his friend's tent across the park until he has to go back before curfew.

Twenty tiny homes were erected for the homeless in the heart of Isla Vista in December. The community’s response has been mixed, with many unaware of the initiative to provide shelter to the growing homeless population.

The Pallet homes are located in the parking lot of the Isla Vista Community Center. Each is fitted with lighting, heat, two electrical outlets and two beds.

Some in the community said the homes attracted more homeless people, creating safety hazards in the middle of an area with lots of foot traffic.

“It got substantially worse,” said Emily Stegeil, a UC Santa Barbara student who works and lives in Isla Vista.

Stegeil works at Amazon across the street from the center and lives nearby. There have been a lot of fights and the situation is more concerning because of COVID-19, she said.

Others say they haven’t seen much of a difference.

Matt Maida owns SOS Liquor across the street from the tiny homes.

But many interviewed in Isla Vista admitted they didn’t know much about the tiny homes or their purpose.

The project was initially arranged through a partnership between Good Samaritan Shelter and Santa Barbara County and was meant to offer services to some of the homeless people who have settled in Anisq’Oyo’ Park.

The Isla Vista Recreation and Parks District had the homeless community vacate the park in December so that they could do maintenance, and anyone who didn’t get a Pallet home settled in People’s Park near the community center.

“We were looking for a non-congregate solution,” said Kirsten Cahoon, director of Homeless Services at Good Samaritan.

A month ago, a petition created by UCSB student Keegan Canfield began to circulate online. It aims to relocate the homes out of Isla Vista to create a “cleaner and safer atmosphere,” but has not received much support from the local community.

As of publication, the petition has not yet reached its goal of 200 signatures.

Canfield declined an interview with The Channels.

“None of these folks weren’t already in Isla Vista,” she said. “This is a much safer thing for the community.”

So far, there haven’t been any positive cases or symptoms of coronavirus in the Pallet homes. They aren’t tested on the site, but temperatures are checked as they enter and leave the area.

There are currently 26 people living in the Pallet homes, and nearly 40 have been served by it altogether.

Bernard Farwell is living in one of the tiny homes and spends his days near the tents in People’s Park.

“I like being there,” he said about his Pallet home.

Farwell has an injured back and is trying to receive disability help. Good Samaritan is helping him and many others acquire documents to receive things like benefits or get a job.

Some have started to receive benefits, found employment or moved to other in-patient programs.

The pallet homes were only planned to be around for about six months, so Good Samaritan has till June to acquire everyone’s documents and get them the services they need.

“Our hope,” Cahoon said, “is that we will have these folks housed by then.”