CESJ takes viewers on ride through history with the ‘Freedom Riders’ 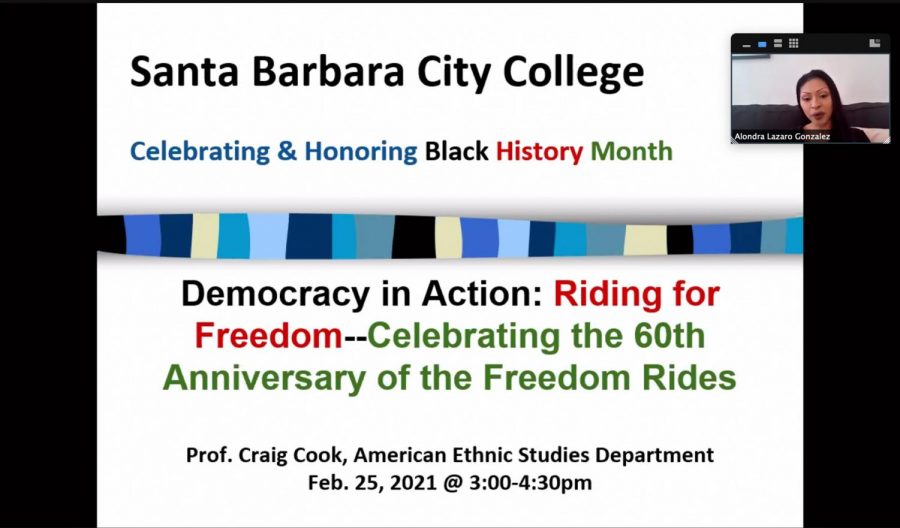 Screengrab of Alondra Lazaro Gonzalez, the Student Program Advisor for the Center for Equity and Social Justice, introducing the "Democracy in Action: Riding for Freedom," Zoom event on February 25. The event was in honor of Black History Month.

Thirty three Zoom participants were taken on a ride back in time to 1961, during the Nashville Freedom Rides.

The Center for Equity and Social Justice celebrated the 60th year anniversary of the freedom riders with a showing of the Democracy Riding In Action: Riding for Freedom virtual event.

“We celebrate and learn about the bravery of many young people just like yourselves who are agents of change for equality and first-class citizenship,” said Craig Cook, Ethnic Studies Professor.

The event gives participants a safe space to hold the much-needed conversation of America’s racist and discriminatory past.

“We must foster a space where we can engage bravely, empathetically, and thoughtfully with the difficult content of America’s past,” Cook said.

The event highlighted many civil rights activists with an emphasis on the Nashville Freedom Ride. This was one of the 16 organized freedom rides throughout history through video clips of the “Freedom Riders” documentary, lecture, and a discussion held at the end.

Cook defined the Freedom Riders as a group that traveled on buses and intentionally violated segregation laws to expose the state government’s unconstitutional reactions and responses to them publicly integrating themselves.
“They were activists from various organizations, many different occupations, most of them again were students,” Cook said.
The participants were taught that “It’s that impact of these students that they had in the participation of the rides after CORE (Congress of Racial Equality) abandonment shows that they played the pivotal role in the success of the freedom rides”

Cook compared the youth then and the youth of today, saying they were and are both capable of great change.

“Lead and powered by youthful students were able to mobilize their own particular talents to the campaign to motivate change much like we’re seeing today,” Cook said.

After attending the virtual event, Asian American studies student was inspired by Cooks classes and learned to embrace his own heritage.

“It gives me pride being Asian American myself,” Marat Ford said.

He is also proud of the education he has received and enjoys attending programs the ethnic studies department hosts.

“SBCC has by far the best types of [diverse] education,” Ford said.

As mentioned during a clip from the Freedom Riders documentary, Dr. Martin Luther King Jr. once said “If a man has not discovered something that he will die for, he isn’t fit to live,” the Freedom Riders being a perfect example of those kind dedicated people.

During the documentary viewing, youthful Freedom Riders leader Diane Nash said “Kill us if that’s what you’re going to do, but we’re going to be rid of segregation.”