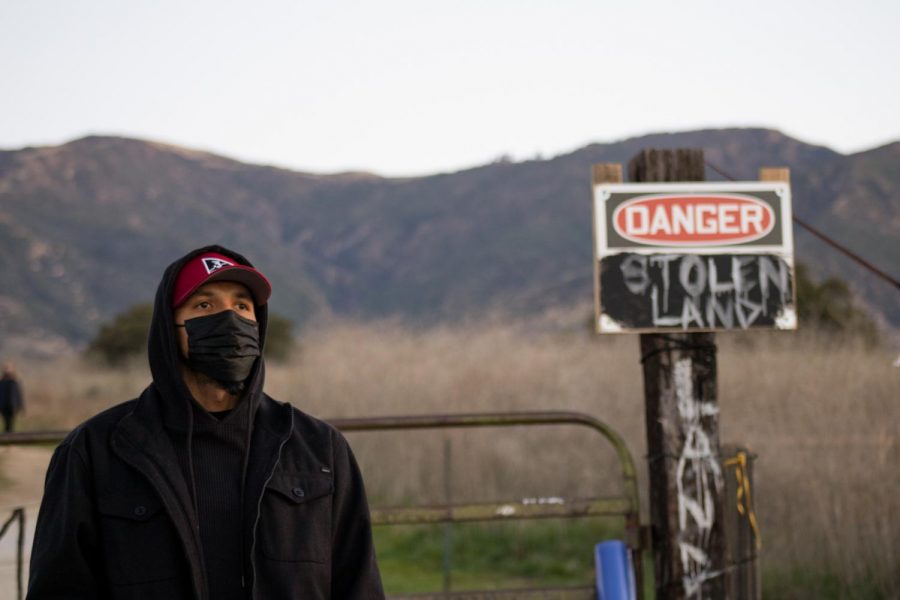 Protester Roy Schulte watches the scene at the sit-in protest on Feb. 26, 2021, at the San Marcos Foothills Preserve in Santa Barbara, Calif. Schulte stayed overnight in support of those trying to protect the land from development.

The second day of protests continued at the San Marcos Foothills Preserve following the arrests and release of eight protestors, six of which were Indigenous women.

The sit-in protests are coordinated by Save San Marcos Foothills, a local organization that has devoted itself to protecting the native grassland from development. Founded in September of 2020, the organization’s leaders consist of four women who are committed to preserving the land.

“We are planning on sitting-in until we get confirmation of a stand-down and an agreement on a purchase price for this parcel of land,” said Dani Lynch, one of the organizers of Save San Marcos Foothills.

Lynch explained the ongoing legal battle that has been waged against the Chadmar Group, a real-estate development company from Santa Monica which owns the land.

After eight appeals and a lawsuit filed in January, Save San Marcos Foothills and the Chadmar Group are in a litigation stand-off until there is a willing seller and an agreed price.

On Feb. 24, Lynch and two others saw a bulldozer and blocked it from entering. It was at that moment where they knew a sit-in had to be staged.

Lynch said that the only way the preservation group found out excavation was beginning was by acting as watchdogs for the land and having as many people as possible on the ground.

They learned that construction would begin at 7 a.m. on Feb. 25, and Lynch and others were on the scene in the early morning, when a bulldozer arrived on-site at about 4:50 a.m, escorted by the Santa Barbara Police Department.

As the local Chumash community was in the middle of prayer, the police arrived instructing protestors to move.

As more supporters arrived, the road to Via Gaitero was blocked off.

Hana Akiwo, a member of the Chumash community, was one of the protesters who tied themselves to the fence, but was ultimately cut loose and arrested.

Akiwo was released later that evening and was back at the foothills this morning, along with many other supporters who either stayed the night or arrived in the early hours of dawn.

Akiwo said that only she and one other detainee were read their Miranda rights. Akiwo also pointed out that out of the eight arrested, six were Indigenous women with four being from the Chumash community.

Akiwo is also a part of the Syuxtun Plant Medicine Collective, which is made up of Chumash members who dedicate themselves to maintaining and preserving native plains, which includes the San Marcos Foothills.

“It’s a relationship that we’ve been building for the past five years,” Akiwo said. “We’re working on restoring the native grasslands. The medicine here gives us life.”

Check back with The Channels for further updates on this story.