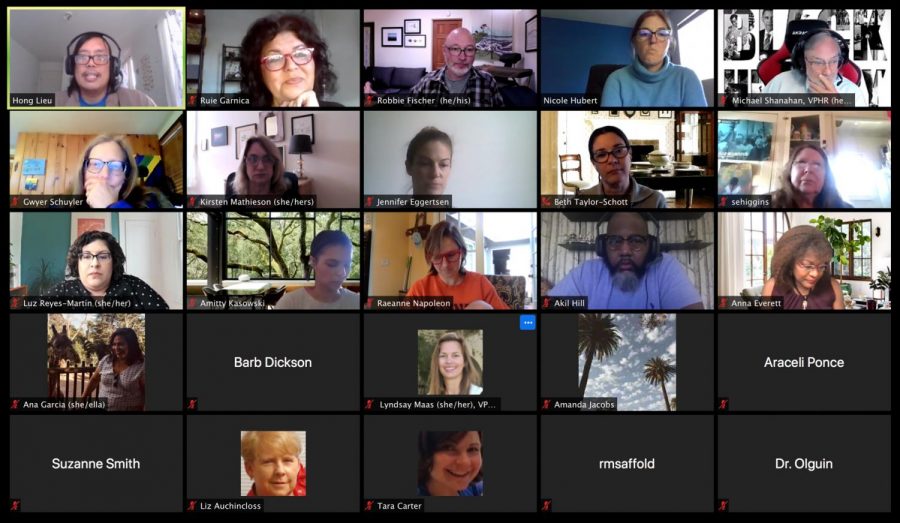 Town Hall co-chair Hong Lieu speaks to the 46 attendees of the second Campus Climate Town Hall meeting on Feb. 25, 2021, over Zoom. The meeting topped off at around 54 attendees, and the theme of the month was retaliation at City College by those in a position of power.

City College may be receiving a belated apology from its leaders in the near future.

At the second Campus Climate Town Hall on Thursday, there was a suggestion to have the president’s cabinet publicly address the discrimination exposed by a campus-wide survey almost two years ago.

“The people that have power need to be transparent,” Admissions Advisor Akil Hill said. “Leadership should lead.”

One of the goals of the town hall is to take suggestions and turn them into actionable items at future governmental meetings—solutions to problems that still persist at City College.

Around 55 people attended this month’s town hall to discuss the issue of “retaliation” on campus.

Retaliation is a form of unlawful discrimination that occurs when leaders target people for the complaints they are filing about their superiors or the institution. This can lead to more discrimination or even loss of the victim’s job.

“It’s a topic that affects everyone on campus differently,” Co-Chair Hong Lieu said. “The protections [against retaliation] are inadequate.”

The conversation was an extension of concerns raised at the previous town hall and in the climate survey where employees were unhappy with the systems of change on campus.

But it can happen to students too.

International Student Advisor Jennifer Eggertsen said she’s received at least 50 complaints from international students being discriminated against by teachers in the 15 years she has worked at City College. And she isn’t the only advisor.

“If you’re an international student, there’s no way you’ll get an ‘A’ in the class,” Eggertsen said some English teachers would say on the first day.

Students would go to advisors in tears, “afraid the teacher will retaliate against them” for speaking up. She said she was embarrassed that there was nothing she could do.

Town hall co-chair Raeanne Napoleon shared similar frustrations and experiences from the past. Although City College is a “special place,” Napoleon said she’s even had to go through several governmental bodies to voice her own concerns.

“At a certain point you find yourself fighting a system,” Napoleon said. “I don’t trust the system at SBCC yet.”

Michael Shanahan, vice president of Human Resources, took some time to go back and forth explaining some of the legal details around filing complaints and holding people accountable.

“It is a process … slower than anyone wants it to be,” Shanahan said.

Employees have many legal protections, and a certain amount of evidence is required to really take action. However, he said they don’t always need all of that to get involved.

“Sometimes we may only have enough for a ‘tough conversation,’ but even so, that begins the process of holding someone accountable,” Shanahan said in a subsequent interview.
Retaliation is a form of unlawful discrimination that occurs when leaders target people for the complaints they are filing about their superiors or the institution. This can lead to more discrimination or even loss of the victim’s job.
At the previous town hall, people were concerned that the meeting wouldn’t be as effective because of the number of leaders and administrators present. Town-hall leaders considered setting guidelines for who could attend the meeting, but decided against it.

“The core to this town hall will always be open access,” Lieu said.

Speaking openly about one’s experiences in a public setting is part of the challenge of addressing discrimination.

“I get there is [a] risk,” Shanahan said. “What we have to do as a community is stand behind each other.”