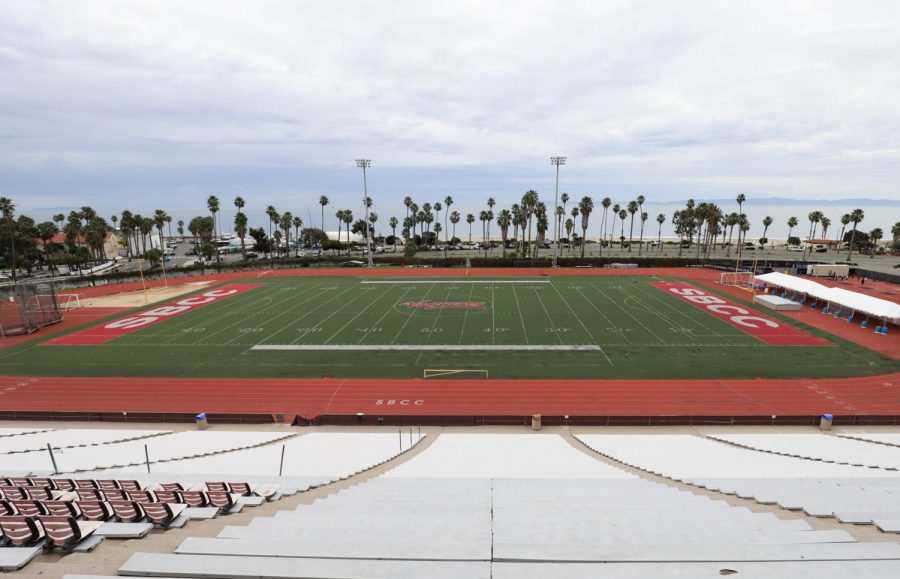 From the top of the bleachers at La Playa Stadium, the black gravel that was laid down as a base for the artificial turf 11 years ago can be seen almost as clearly as if you were down on the field on Feb. 1, 2020, at City College in Santa Barbara, Calif. The holes and ripped-up turf can also be seen from a distance.

Three years overdue, fading in color and sinking, the turf for City College’s La Playa Stadium is scheduled for replacement on April 23, after an 11-year run.

“It’s not up to standard,” Athletic Director Rocco Constantino said. “This might be the most picturesque stadium in the country, and we’re sitting here on a dilapidated field.”

La Playa’s turf is supposed to be replaced every eight years, with the last renewal scheduled back in 2018. However, The Board of Trustees voted against replacing it to try and keep up with a growing budget deficit.

New turf wasn’t essential for the college at the time, the board said.

Actions were further delayed when COVID-19 forced schools to focus on quickly changing to an online format.

“I don’t blame the board for being cautious with this,” Constantino said.

Head coach Craig Moropoulos is on the field almost daily and has seen the deterioration first hand.

He’s noticed different colored lines disintegrating faster than the rest of the green field, causing the turf to form different levels over time.

Moropoulos also said the “in-fill” in the turf’s fibers have started to rise and spread over the top layer, making it hard for athletic shoes to grip the field and maneuver safely.

“The cleats the guys wore were grabbing into the in-fill and they weren’t giving at all,” Moropolous said. “That’s when players get hurt.”

And players aren’t the only ones who’ve been affected by the degenerating field.

“We’ve seen athletes and coaches complaining about sore backs and knees,” said Constantino, “just from standing and walking on the field during practice.”

Constantino and Moropoulos said student safety is the first priority and a new field will help prevent any unnecessary injuries.

Besides improved safety, a new turf will benefit Sant Barbara as a whole.

La Playa Stadium is used by local schools, utilized daily by exercisers from the public and has been rented out for events and concerts.

“It’s a definite recruiting tool for us,” said Moropoulos about the new turf. “But this won’t be just for sports, it’s a community gathering area.”

A defining reason the board approved the new turf was because of the efforts of Student Trustee Lilli McKinney.

Since she first started as an Associated Student Government officer in fall 2020, McKinney had been working with Constantino in efforts to push the Board of Trustees to approve the turf’s replacement. They presented around 12,000 signatures supporting the cause.

“The petition just said how we stand,” said McKinney, “with the student body and in support for the turf being built.”

The new turf will be replaced alongside other structural improvements to the field in general.

“There’s no end to the benefits of a new field,” Constantino said. “Everyone who uses it deserves to be safe and our college deserves to take pride in that field.”