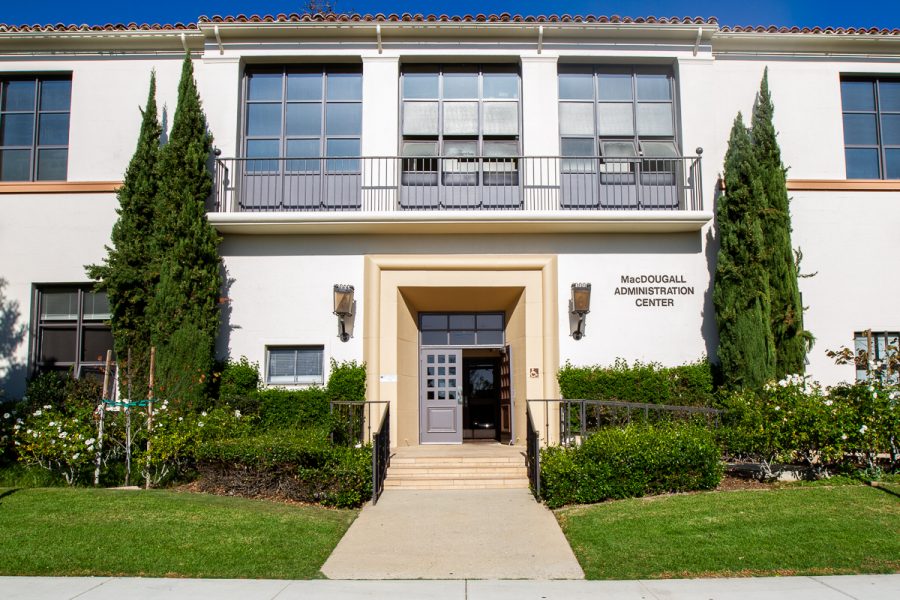 The Administration Building at City College on Thursday, Oct. 25, in Santa Barbara, Calif.

City College is in the process of instituting a new board policy formally prohibiting relationships between college employees and students.

Board of Trustees members Jonathan Abboud and Marsha Croninger drafted the new policy, which prohibits faculty and staff from “fraternizing” with students, providing or using illegal drugs in the presence of a student—including alcohol and marijuana, or engaging in a sexual relationship with a student enrolled in the college.

Academic Senate President Raeanne Napoleon said the policy was in response to an allegation that left a former instructor on administrative leave for allegedly having sexual relations with a student.

“The point of this [policy] is to protect students. There is currently an instructor out on administrative leave because he did drugs and slept with a student,” Napoleon said. “That is where this is coming from.”

The details in Napoleon’s comments match those of astronomy instructor Erin O’Connor, who was placed on paid administrative leave last fall.

Trustee Croninger said she and Abboud based their drafted policy on UCSB’s extensive policy, which spans over 30 pages and covers all types of relationships between faculty and students.

“This is a great first start for this policy,” Abboud said.

Though most universities have similar policies in place, many community colleges have not yet instituted official guidelines prohibiting this behavior. The new board policy would be the first time City College puts language in place addressing this issue.

Croninger said they were looking to cover the “basic, essential concepts,” and to put in detailed terms what is and isn’t allowed in employee-student relationships. She said that the policy was necessary because faculty are in a “position of power and authority over students, and that position that they hold deeply affects student success.”

The draft was brought before the board policies committee and the Academic Senate, where they amended language from the original, including the change from “employee-student relations” to “consensual relationships between faculty, staff and students,” and adding certain exceptions.

Currently, complaints that violate the school’s sexual harassment policy, which states “faculty cannot have a sexual or romantic relationship with students,” would result in a Title IX investigation.

In the past two years, there have been eight complaints of inappropriate relationships between students and employees with four being formally investigated, according to Title IX coordinator Linda Esparza Dozer.

During the president’s report at the latest senate meeting, Napoleon provided an update on her initial comment, where she said the instructor—who was charged with furnishing alcohol to a minor and possession of nitrous oxide for intoxication—hasn’t been listed as being on paid administrative leave since January 2020.

“I do not know the status of his leave at this time and what it would be classified as,” said Napoleon. “But I do know that he will be returning to his role on campus in the future.”

O’Connor was placed on paid administrative leave in October, according to documents obtained from a Board of Trustees meeting on Jan. 23. Since, there has been no update on O’Connor’s official status with the college.

He could not be reached for comment, but addressed the allegations against him in an Independent article last week.

“Last year I had a brief relationship with an adult student, who was formerly in one of my courses at the college,” said O’Connor, “and while the student confirmed during the investigation that our relationship was consensual, I nevertheless regret that decision and have accepted consequences from the district for entering into this relationship.”

The Board of Trustees will review the draft again in December before approving or asking for additional changes to the policy in January.

Additionally, O’Connor received a citation for “furnishing alcohol to a person under 21,” not “a minor,” and the charge for “possession of Nitrous Oxide” was dismissed.