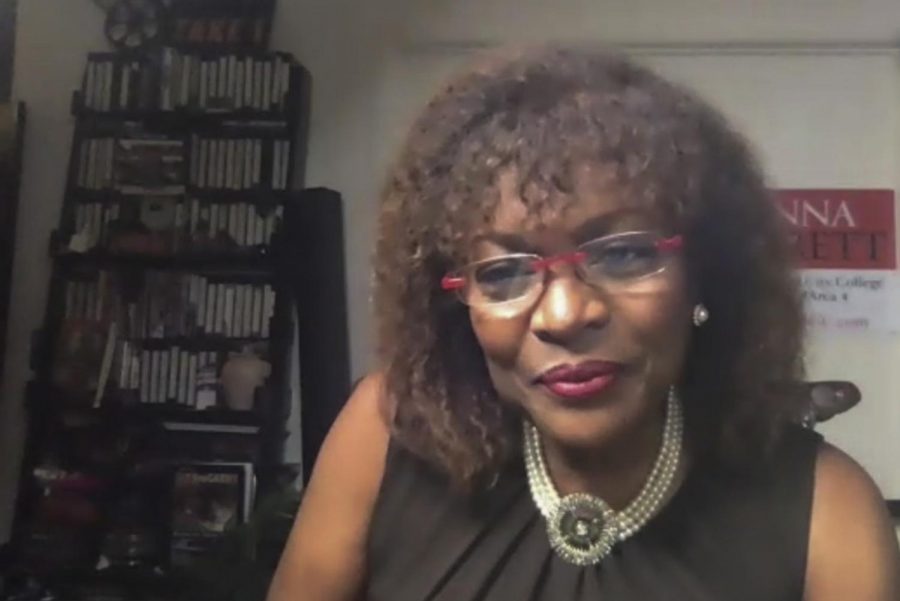 Santa Barbara Board of Trustees candidate Anna Everett in a Zoom interview on Election night Nov. 3, 2020. The first results from the elections show Everett with 68% of the votes.

Former UCSB instructor Anna Everett overwhelmed opponent Celeste Barber by 4,017 votes taking in 68% of the votes tallied for a seat on City College’s Board of Trustees as of 10:00 p.m. on election night.

Everett’s new position would signal a new view on equity and involvement for City College’s Board of Trustees.

“As a black woman in a predominately white institution and having worked those institutions for decades,” Everett said. “I feel really confident being able to be effective while listening to all perspectives.”

This will be Everett’s first time serving on City College’s Board of Trustees, though she has experience in administration at UCSB, where she served on several equity committees and held the Vice Chancellor for Diversity, Equity, and Academic Policy position.

The first update of unofficial results was released around 9:00 p.m., and from the beginning it became clear that Everett would emerge the victor.

“I want City College to have the best trustees,” said Everett. “I think I’d be one of those.”

Everett has served on the board of directors for Santa Barbara’s Women’s Political Committee as well as with the Democratic Women of Santa Barbara.

Her main priorities are the budget, curriculum reform and tackling equity issues at City College.

“Calling out people who should be called out on issues that can be detrimental to an institution will be important,“ said Everett.

Everett outraised Barber $8919.25 to $4223.36 through October 17, according to official forms filed with the County of Santa Barbara Elections Division.

Everett said she wouldn’t have made it this far if not for her dedicated campaign manager and all the support she received from her community.

“As a first-time candidate I’m feeling good about Santa Barbara as a place of political engagement,” she said.

Barber, although not victorious, ran a campaign that focused on issues and acknowledged her defeat with dignified composure.

“I found her to be a good spokesperson for the position,” Everett said about her opponent Barber. “I just happened to disagree with her.”

“I was prepared either way, and my opponent was certainly a stellar candidate,” Barber said about Everett. “City College is going to be in good hands.”

Barber ran on a platform that highlighted the need for racial equality and emphasized the vital need for physical education and sports. She also emphasized City College making a bigger connection with local K-12 schools.

“We didn’t attack each other, we stayed on the issues,” Barber said. “This is how democracy is supposed to work.”

“I have so much to contribute to City College,” said Everett. “I’m looking forward to being part of the community.”