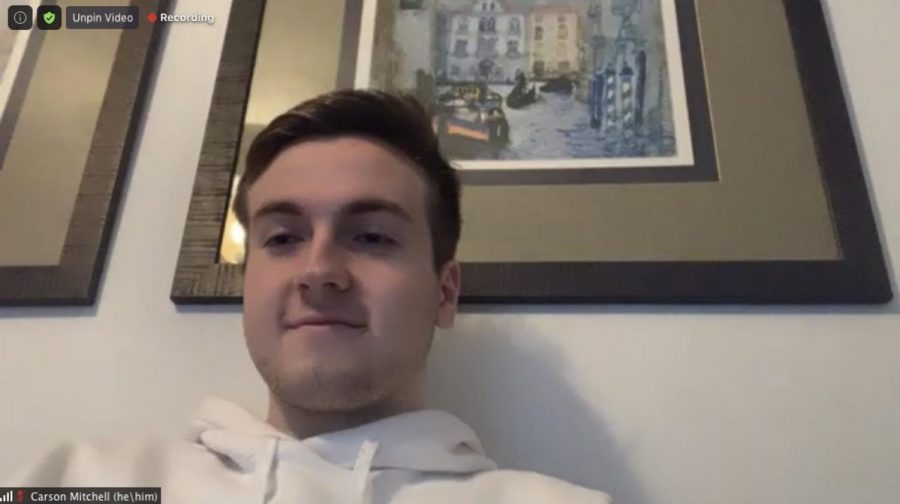 Screengrab of Carson Mitchell, the president of the Associated Student Government, during the virtual ASG meeting over Zoom on Oct. 2, 2020.

The Associated Student Government recently approved a chapter of the nationwide pro-life club Students for Life, in a decision which marked a new direction for a senate with almost an entirely new lineup this semester.

The previous senate unanimously denied the conservative club Turning Point USA’s proposal for a City College chapter last spring. After the denial, Turning Point appealed to the Board of Trustees and had the decision reversed.

“We don’t have the authority to deny a club for political or personal reasons,” said President Carson Mitchell. “If they come with a complete form I think we are required to approve them.”

Each officer must go through training on how to be a member in a shared governance committee before they take on their role as a member of the senate. Mitchell said that for this semester he stressed the importance of being bi-partisan and keeping their personal beliefs away from their decision making.

“Five officers heeded my warnings,” Mitchell said. “This isn’t the time to bring political beliefs into this.”

Mitchell said if the officers had voted based on their own personal beliefs, they “more likely than not would have voted no.”

The most vocal senator in support of Students for Life was Commissioner of Events Anastasia Fenkner.

“There still needs to be that diversity of free speech,” said Fenkner. “Our job is to represent the students.”

Fenkner said that she would support any club that meets all the requirements listed out in the senate’s guidelines. She said she wouldn’t think twice about passing a pro-choice club charter should the matter come up.

“I don’t think there’s any kind of shift, I just think Anna Reed did a great job providing her point of view,” Fenkner said. “The ASG are showing maturity by allowing a point of view they don’t necessarily agree with.”

For Student Trustee Lilli McKinney the vote to deny the charter was a “no brainer.”

She said approving the club was counterproductive to creating a “safe and welcoming environment,” for those on campus who have had abortions.

She said that the current senate will mature together and ultimately choose the path that is best for all students.

“As we grow and continue to meet, officers are going to find their voice and start trusting the views of their fellow senators.” McKinney said.

“It’s not my job to infringe [on] their free speech,” said Commissioner of Marketing Lauren Bell. “I don’t want to infringe on someone else’s belief just because I don’t agree with it.”  She said she has never seen clubs on campus ever promote violence before, so there is no reason to suspect a new club would become violent.

One thing that she said would make her fight to disband a club would be if they were spreading misinformation.

“If something did happen I would take leadership with the ASG and take the necessary precautions as it happened,” Bell said.

Student Advocate Suzanne Obando said that it’s possible some other officers are now scared to go against the Board of Trustees, after the previous senate’s denial of the Turning Point USA club charter was reversed later by the board.

“I think that really scared everyone, especially the advisors and our president,” Obando said. “We’re not denying charters because of what happened.”

Mitchell said there has to be a distinction between personal beliefs and what is brought to discussion in meetings.

“Our job is to make sure student organizations meet all the requirements,” Mitchell said.

Those requirements include having an acting staff member as the club’s faculty advisor and making sure the roster has at least 15 currently-enrolled student members.

“It kind of upset me to learn the ASG is kind of a ‘dummy’ vessel for clubs,” said President Mitchell. “We just approved it if everything is there.”