Policies collide as candidates argue in an open forum debate 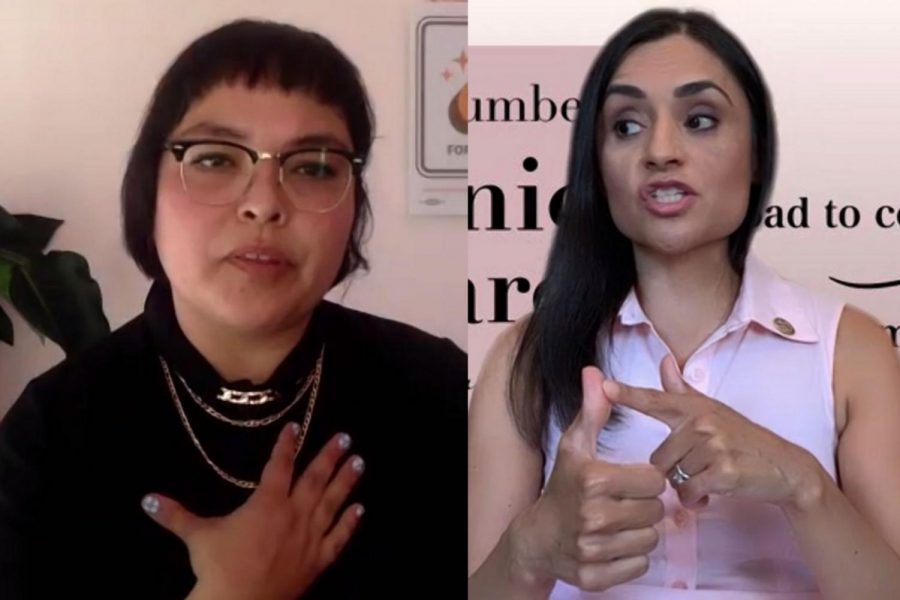 From left, small-business owner Erin Guereña debates Area 3 Incumbent Veronica Gallardo in an online forum hosted by the Santa Barbara City College Foundation on Thursday, Oct. 15. Guereña is looking to represent minority students who may not be able to succeed, even with the resources offered by the college.

Race and equity factored heavily during a forum hosted by the SBCC Foundation featuring the six candidates running for three open seats on the Board of Trustees in the upcoming election.

During the two-hour forum moderated by foundation President Geoff Green, Area 3 candidate Erin Guereña was the only candidate to express disapproval with some of the trustees’ history in actions against discrimination on campus, challenging her opponent incumbent Veronica Gallardo’s voting record on race, equity, inclusion and diversity.

“So far in the last few years there’s been two resolutions that address equity on campus: Resolution 10 and Resolution 18,” Guereña said, “And both times my opponent [Gallardo] voted against them.”

Resolution 10 sought to address recurring complaints of a fractured campus climate in regards to equity, while Resolution 18 was aimed at “affirming [the board’s] commitment for Black and African-American students, faculty and staff” in response to the death of George Floyd, who was killed by Minneapolis police earlier this year.

Gallardo, whose background is in public education, remained focused on education reform and bringing programs and resources together “to see a K-14 system that works.”

“For someone that spent over 20 years in both K-12, higher-ed—City College specifically—this is something I think about daily,” Gallardo said. “The biggest barrier to student success is the lack of adequate literacy.”

Guereña said that there are bigger issues facing City College and making students feel safe should be top priority.

“If students don’t feel safe, then we don’t have a successful campus,” she said.

Trustees who opposed the resolutions expressed concern over City College becoming the target of lawsuits in the future if they were approved.

Area 2 incumbent and current board President Robert Miller, along with Area 4 candidate Anna Everett, agreed with Guereña that Resolution 18 was a good first step towards addressing racism and equity.

The board’s decision to elect Superintendent/President Utpal Goswami last year also received praise during the forum, though some candidates addressed the challenge of cutting the deficit while preserving student success.

“I am confident that under Dr. Goswami’s leadership we can achieve that,” Miller said.

During the discussion, the forum’s live-chat allowed attendees to chime in during discussion, with some candidates facing criticisms from the public.

Gallardo and Area 4 candidate Celeste Barber received comments questioning their conservative ties, though Gallardo did not address any of these grievances, nor any statements made by Guereña during their 40-minute debate, instead focusing on financial stability and student support.

“I truly envision that SBCC can support students in our entire community to be financially independent, to reach upward mobility,” Gallardo said.

Barber received comments that accused her of undermining anti-racism efforts at City College with her actions in the past, though during her campaign she has told The Channels that “the most serious issue facing our campus and the nation is the issue of race, specifically the mistreatment of African-Americans.”

“George Floyd horrifically reminds us that as a nation, as a people, we still have a long, long way to go,” said Barber, adding that the greatest threat to minorities in this country remains “poverty and educational inequity.”

Area 2 candidate Ron Liechti said that there is “no room for discrimination on campus” although he did not want to expand further on the issue of race.

“Well, it’s a difficult subject for me to approach because I am a white, Christian, elder male,” Liechti said. “I want everyone to feel welcome.”

“What I have to say, people don’t want to hear, I think, because of my identity. I can’t walk in the shoes of a Black man or a Black woman, or a lesbian, or any of the different sectionalities that we have.”