Six diverse candidates compete for SBCC Board of Trustees positions 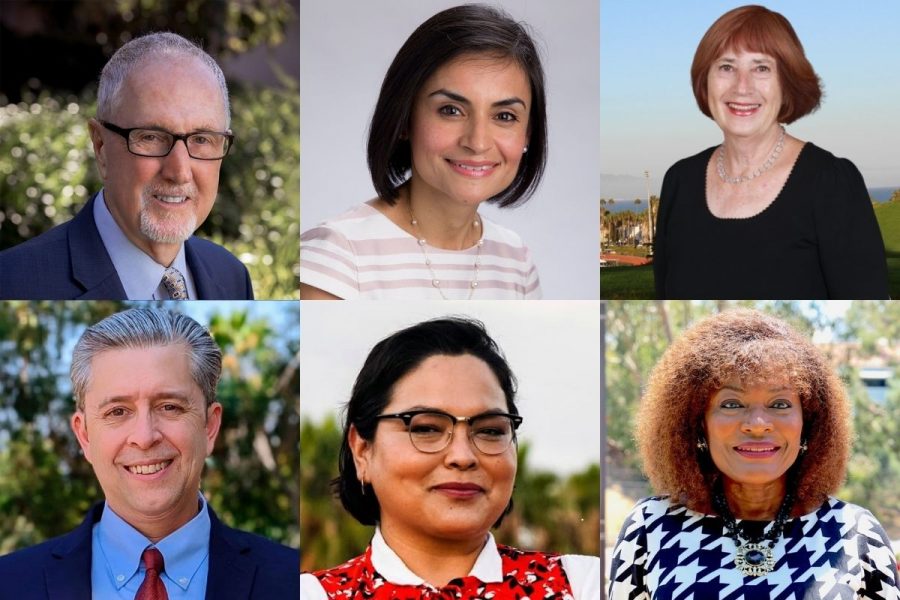 Six candidates are vying for three open seats on City College’s Board of Trustees on Nov. 3, 2020. The Channels provides an overview of the six candidates and their platforms.

Current President Robert Miller has been a board member at City College since February 2018, and though he retired from practicing law in 2015, he uses his experience in litigation to guide his decisions.

“The strengths I bring to my position as a Trustee derive primarily from my background in public service and the law,” said Miller.

He has been active in the Santa Barbara and Goleta area for years, serving on the Goleta Planning Commission and leading many local environmental efforts, as well as serving in the Peace Corps and working at the U.S. Department of State.

Miller supports the college administration’s recently laid out plan to balance the budget in the next two years by making strategic cuts, and said that state funding and a return to pre-pandemic enrollment numbers could be the key to the college’s financial challenges.

His goals align with the Board of Trustees goals for the year: long term financial stability, a safe return to classroom instruction and review of policies and procedures through an anti-racism and equity lens.

He said he is proud of how the school was able to respond to the pandemic, but acknowledges that the effects will be felt long after a return to normal instruction.

“The budget challenges we face may very well be with us for many years to come, and we must react accordingly,” Miller said.

This is Liechti’s first time running for office as an elected official, but he said his experience with finance management should prove valuable to the board.

“I’ve been in charge of public funds for many years and have an impeccable record of accountability, performance and success,” said Liechti, who is a certified accountant with a career spanning over 35 years.

On joining the Board of Trustees, Liechti said going through the public education system inspired him to get involved.

“I’m grateful for the opportunities I gained from public education, and I want to make sure public education is there for current and future generations in our beautiful city,” he said.

Liechti has lived in the Santa Barbara area for almost 30 years, and has worked as the city’s Fire Business Manager for the past decade. He has served as president of the Administrative Fire Services Section of the California Fire Chiefs Association, as well as the Santa Barbara Unified School District’s Citizen Bond Oversight Committee.

In his spare time, Liechti plays music in various bands and exercises outside, “walking, hiking, beaching, eating out, sports, golf and disc golf.”

Liechti said his professional fiscal knowledge sets him apart from his opponent, and regarding cuts that must be made to the budget, he said his base philosophy is to “keep any future reductions as far away from the classroom as possible.”

He said the college should “keep the level of excellence we’ve all grown accustomed to” and he wants to see City College “remain a viable & thriving institution.”

She currently teaches elementary school and has served on the Board of Trustees since 2016.

During her time on the board she has been a proponent of fiscal responsibility—which she says is instrumental to student success.

“We will have to reduce college spending by 3.5 million dollars in the next two years in order to support our programs that award certificates, degrees, and help students transfer,” said Gallardo.

As a Trustee Gallardo said she was focused on supporting classified staff  and advocating for Dual Enrollment for local students.

She said she enjoys working with Superintendent-President Utpal Goswami and hopes to be elected to extend her time on the board.

“We have a very focused and intelligent college president that is committed to equity and student success and I am running to serve another term on this board to support those efforts,” she said.

Gallardo said she envisions a City College that “can support our residents to become financially independent, provide the upward mobility to lift families out of poverty, support entrepreneurship and innovation, as well as support families and their children attain certificates, degrees, and transfer to 4 year institutions.”

Born and raised in Santa Barbara, City College alumni Erin Guereña remembers deciding against attending a university to pursue another path to her career.

“Like many, I decided to forgo the university route and pursue a skilled trade and entrepreneurship,” she said.

Guereña owns and operates a local barbershop, Haven, with her husband, and said that owning a small business gave her the skills to understand budgeting, staffing and the importance of responsible allocation of time and resources.

She said she is “committed to improving the programs and services that enable student achievement and equitable access,” and is in full support of the SBCC Promise Program, which provides free tuition to local high school graduates.

Guereña is running for elected office for the first time.

She said if she was elected to the board, she would like to see more work done to increase enrollment and expand programs for those who have lost employment and wish to return to school.

Guereña’s top priorities are maintaining staff and student safety through the pandemic, guiding the college through economic uncertainty and improving the campus climate to restore trust in leadership through open communication.

She describes her values as progressive with a commitment to advancing racial equality in higher learning.

Anna Everett retired from teaching media studies at UC Santa Barbara for over 20 years in 2019  and now hopes to return to public education as an elected member of the Board of Trustees.

Everett said her extensive work with powerful women’s organizations in Santa Barbara County speak to her commitment to women’s rights and equality.

She has served on the board of directors for the Santa Barbara Women’s Political Committee and later with the Democratic Women of Santa Barbara County.

As a first-generation college student, Everett received degrees from San Jose State and UCLA before completing her doctorate at USC. Everett hopes her background can help inspire other students to succeed.

Her top three priorities for City College are the budget, racial and sexual diversity, equity and inclusion, and curriculum reform. She said her extensive administration experience at UCSB sets her apart from opponents and will help make decisions regarding the budget.

Celeste Barber taught English at City College for 20 years before retiring in 2015, and said her experience will help bring the faculty point-of-view into board discussions.

Barber received national media attention in 2018 after she protested the Trustees’ decision to ban the pledge of allegiance, and emerged as a high-profile conservative figure on campus.

Barber has been recognized for her work with the Great Books Curriculum, a program that she proposed and oversaw that exposed community college students to the classical works of Western and World Cultures.

Barber was active in the faculty union, the Instructors Association, and outspoken in support of adjunct faculty throughout her time at City College.

She said her experience and ability to understand faculty would be an asset during labor negotiations, and when working with the board to negotiate a budget that is “mindful of our commitment to our teachers, counselors, and staff.”

Barber said “the most serious issue facing our campus and the nation is the issue of race, specifically the mistreatment of African-Americans. If just one student or one employee is harmed on our campus, that is one too many. And it goes without saying, racism will not be tolerated, ever.”

She said that when thinking about changes for the budget, leadership should consider not only the students’ education, but their well-being.

“Physical education and campus sports are going to be vital as our community re-opens following the pandemic. The same with the college’s cultural offerings: music programs, theatre, lectures. These are necessary to a functioning campus,” she said.

On opening up campus, Barber said “the college must first be bound by the County Health Department and the state’s mandates,” before thinking about other challenges.