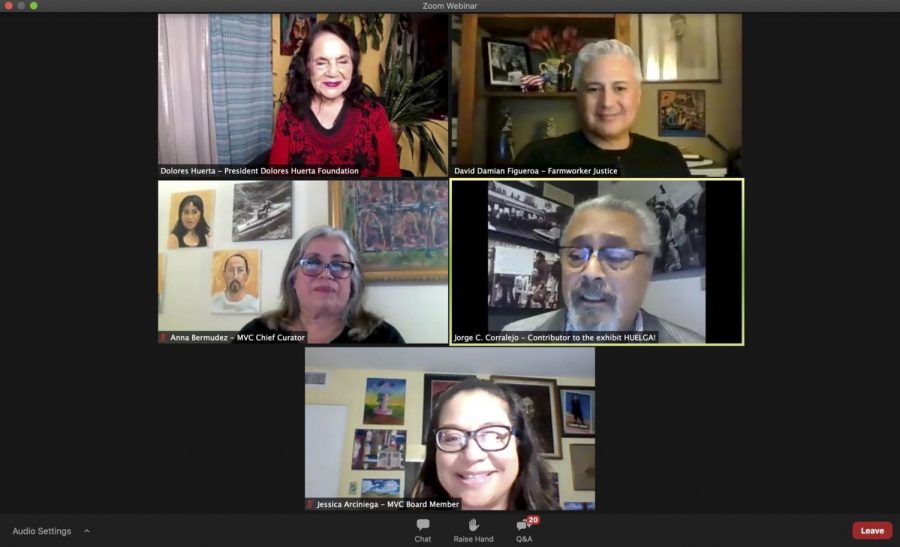 Screengrab of Webinar hosted by The Museum of Ventura County featuring Dolores Huerta on Sept. 21. During the Webinar Huerta and other civil rights and Chicano activists and leaders spoke to what they are currently working on, including a photography exhibit centered around preserving photographs of the United Farm Workers union in the 1960s-70s.

The Museum of Ventura County hosted a conference on Sept. 21 spotlighting civil rights activist Dolores Huerta and other prominent United Farm Workers union members who will be honored in an upcoming exhibit.

City College students were invited to attend the lecture by Equity Student Program Advisor Alondra Lazaro Gonzales. Student attendees could leave questions for the Q&A portion of the talk, learning first-hand from the activists who envisioned the exhibit.

“In 1962, Dolores and Cesar Chavez founded the United Farm Workers union, she served as vice president and played a critical role in the union’s accomplishments for four decades,” said museum board member Jessica Arciniega.

Huerta went on to establish the Dolores Huerta Foundation where she serves as president. The foundation helps educate and register voters, advocates for education reform, brings about infrastructure improvements in low-income communities, pushes for greater equality for the LGBTQ community and creates strong leadership development for minorities.

In 2012, Barack Obama honored Huerta with the Presidential Medal of Freedom, the highest civilian honor in the United States.

The Museum of Ventura County staff spent months preparing for an exhibit to honor Huerta and the United Farm Workers union’s historical moments.

Anna Bermudez, chief curator of the Ventura Museum and Agriculture Museum in Santa Paula,  began her journey with the United Farm Workers exhibit in February 2019. Bermudez said that the first meeting she had with Jorge C. Corralejo, another contributor to the exhibit, would forever stay in her memory.

Corralejo is a long time United Farm Workers activist who presented her with bags and boxes of artifacts and photo albums packed with photos from the 1960s and 70s that he had taken during his time with the union.

In that moment Bermudez knew that she had to do the exhibit and preserve the photographs from the magnetic albums before they were ruined.

“It was an interesting and daunting task … it was a labor of love,” Bermudez said.

She decided to take on the project alongside her staff and three members of the Latino Advisory Committee, removing each photo from the magnetics using dental floss and business cards—a task that took months to complete.

The exhibit was put on hold indefinitely due to the pandemic.

“The final exhibit finally came together a week before we were on quarantine,” said Bermudez. “We’re hoping that in some point in time you all will have the opportunity to see this fantastic collection.”

Huerta was able to answer questions about social justice art from the community and moderator David Damian Figueroa during the conference.

Although the exhibit isn’t available for in-person viewing, there is a descriptive and informative virtual tour that is available for anyone interested.

Huerta thanked the staff for the exhibit, reminding everyone that there is still work to be done for laborers in the community.

“It’s really wonderful because you know farm workers are still struggling,” Huerta said. “Don’t give up … if you get a little set back don’t let that stop you.”