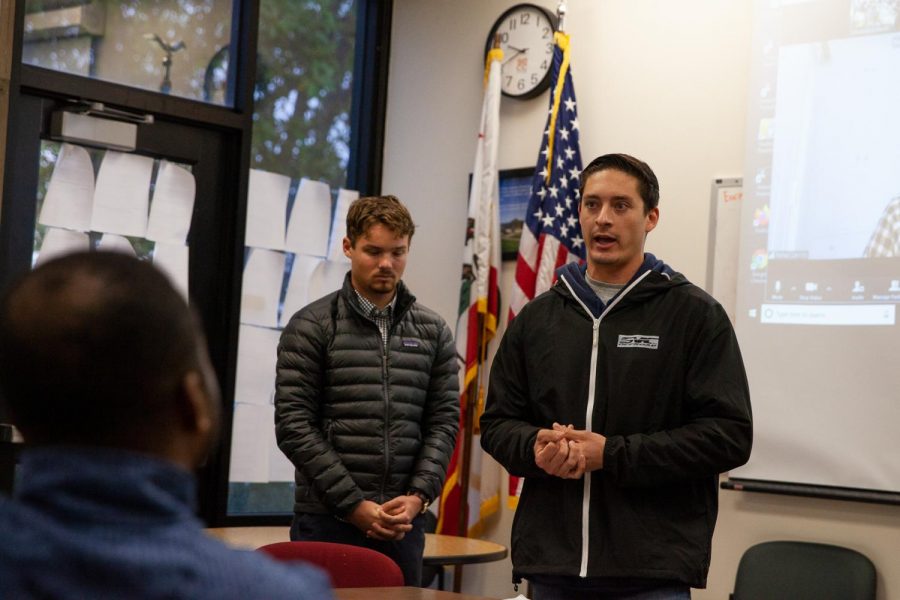 Student Bailey Hanna, accompanied by Nathaniel Grotenhuis (left) answers questions from the Student Senate about Turning Point USA being an organization tied to racism and discrimination during his club charter pitch for approval to officially bring the organization to campus on Friday, March 13, 2020, in the in the ASG meeting room Campus Center Room 223 at City College in Santa Barbara, Calif. Hanna argued that the “bad bugs” in the organization don’t represent his beliefs and goals with the club before the Senate denied the proposal.

Bailey Hanna, Cainan Iorio, and Nathaniel Grotenhuis stood uniformly before the senate Friday, with their hands clasped in front of them as they pitched the club’s approval.

Turning Point USA describes itself on its website as a “non-profit organization whose mission is to identify, educate, train, and organize students to promote freedom.”

Many students believe the group is doing anything but.

The organization came under intense scrutiny from students in a prolonged public comment during the Feb. 8 senate meeting, in which the senate tabled the vote on its formation. Students cited examples of racism and discrimination by the organization, including comments made by former national field director Crystal Clanton when she said she “hates blacks. End of story,” according to a New Yorker article.

During this meeting, however, it was the senators that voiced their concerns.

“If we’re seeing a large volume of students that are acting truly offended by this organization, it’s our job to act on what the students want,” said senator Rafael Carrillo. “What is your argument that we need to have this on campus?”

“I don’t really care about people’s feelings,” said Hanna. “We’re here representing ourselves and what we believe in.”

When the senate pushed Hanna to explain the many controversies surrounding Turning Point USA, he said that they’d have to be more specific because “there are a ton of them.”

One of these controversies is Turning Point’s ‘Professor Watchlist’ which lists the names and pictures of professors that the group claims “advance a radical agenda in lecture halls,” according to its website.

“Having a professor watchlist that attacks faculty, I don’t think that’s what we want at school,” said senator Kenny Igbechi. “I think faculty should have freedom of expression.”

Igbechi also criticized Hanna’s claim that a Turning Point USA club would promote free speech, saying the club’s definition of the term would actually infringe on the free speech of students and faculty on campus.

The senate traditionally votes to approve a club charter’s formation.

In this case, Carrillo put forth a motion to deny its formation, which Igbechi seconded, and the senate unanimously voted for.

Four senators voted and participated in the meeting virtually through video chat amid growing concerns over the coronavirus.

The senate also unanimously approved the formation of the Injustice Club, which states its purpose to “spread awareness of transgressions across the country using social media platforms.”

The senate also allocated $1,600 for the headshots and group photos for its senators.

The senate will reconvene at its March 20 meeting.