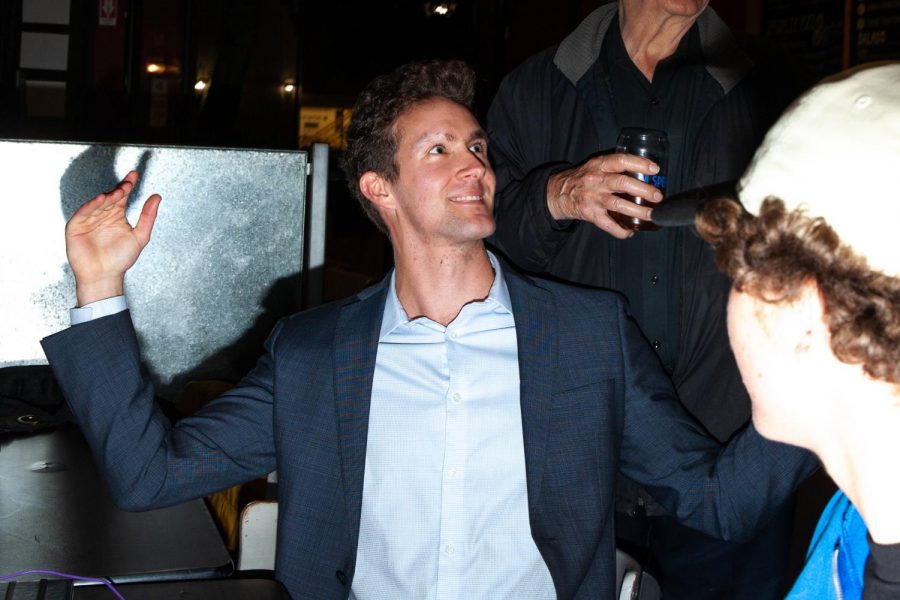 Though Cole consolidated the republican vote and may finish as the candidate with the most votes, it is improbable that he would fare well in the general election.

“No new taxes,” Cole said regarding what he plans to accomplish in Sacramento should he win in November.

Cole spent significantly less on his campaign than his competitors, raising only $9,000.

“We looked for donors for a while, but it seemed like we didn’t need them,” said Cole’s father, Thomas, as supporters crowded around a flat screen TV at Persona Pizza on State Street.

According to his website, Cole wants to preserve Proposition 13, advocate for private healthcare, and change the way welfare agencies “dole out city-owned housing to new arrivals.”

“It’s the message, not the money,” Thomas Cole said.

Last week, Cole predicted that he would find success on Tuesday night, expecting to receive over 30% of the votes.

“[This is a] great start. This is better than even I thought it would be,” Cole said.

“We’re going to give the Democrats a run for their money, and they have a lot of money so they’ll be running really hard,” said Abate. “We’re going to do what it takes to save our country and take it back.”

Abate will be running for a seat in the Goleta Union School District in November.

The Santa Barbara County Democratic Party had decided not to endorse a candidate until after the primaries, but it is likely they will endorse the leading democrat soon after the results are tallied.

Steve Bennett is holding the position as the top democratic candidate. Murrillo, the Santa Barbara mayor, is not far behind in the results released Tuesday night.

“I’m cautiously optimistic and very grateful,” Bennett told The Channels, though Murillo is hopeful that she will finish strong with the mail-in ballots that have yet to be counted.

“I’m just trying to keep the faith,” said Murillo, who joined First District Board of Supervisors candidate Das Williams at Casa Blanca Restaurant and Cantina for a democratic candidate gathering.

Murrillo has the most votes in Santa Barbara, but with Bennett’s strong results in Ventura he is predicted to lead the polls for the democrats when the counties are added together.

“I guess it’ll be a nailbiter,” said Murillo.

Jonathan Abboud ran a strong campaign as well, but as local election results started to come in, his campaign headquarters in Isla Vista started to quiet down and the party came to an early end.

“I’m proud of everybody who worked on the campaign,” Abboud said. “I think we did a good job.”

Despite starting out low, Abboud remained optimistic as the results will continue to be counted throughout the week.

“It’s not the best scenario… but we’ll see how it turns out,” Abboud said.

Check back with The Channels for more coverage throughout the election.