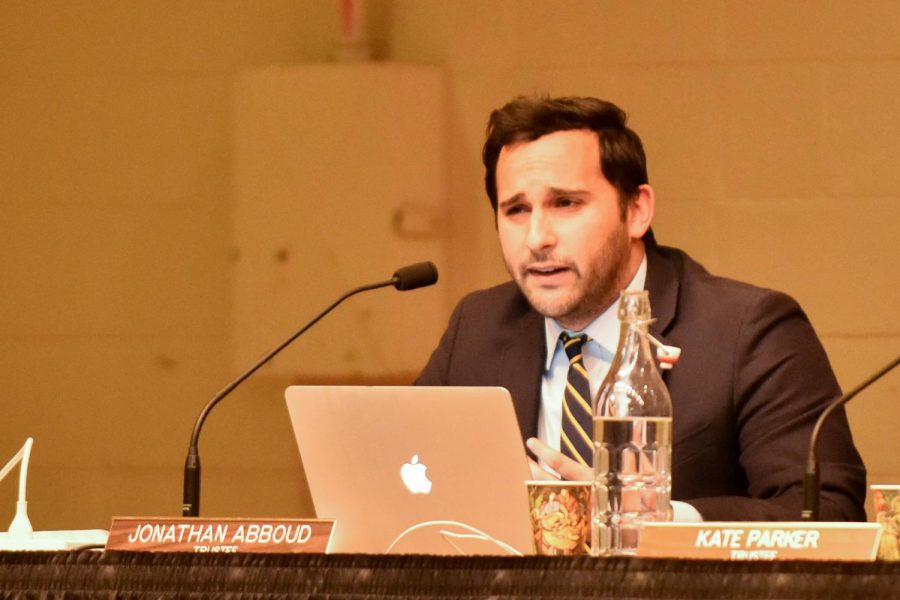 “She called me an Arab,” said Antoinette at the microphone. “You are a racist woman.”

The event started traditionally with the moderator asking the six candidates questions about housing, education, rent control, and several other topics.

But two hours in, and after a brief intermission, the debate degenerated into a game show-like atmosphere.

Prior to the event, organizers placed cards with names and numbers under chairs.

When it was Spangler Adams’ turn to ask a question, she asked Jonathan how to help “illegal immigrants” and their children assimilate into American culture.

“I’ve been watching you for the past two years,” Spangler Adams said. “You sit down during the pledge, you post derogatory comments towards whites on your Facebook.”

As Jonathan began to answer, Antoinette approached Spangler Adams, and the two began arguing loudly in the back of the room. It was during this time Spangler Adams repeatedly referred to Jonathan as a “self-identified Arab.”

“I never thought we would be attacked like that,” Antoinette told The Channels.

She returned to her seat, took to the microphone and addressed Spangler Adams directly. “What’s wrong with being Arab?”

She said normally she wouldn’t have been so outspoken, but that Spangler Adams’ comments about her son’s ethnicity were “hurtful and insulting.”

“What does being Arab have to do with what’s going on tonight?” she said. “Challenge him on the issues, not that.”

Antoinette pointed to the larger issue behind the conflict, saying “Not only Jonathan is being treated like this. It’s blacks, hispanics and asians.”

The night’s original moderator for the event, journalist Jerry Roberts who hosts a community access show called Newsmakers with JR, was taken aback by the freeform frenzy that ensued during the second part of the debate.

“Santa Barbara prides itself on tolerance, but there’s so much conflict and tension around race just below the surface,” Roberts said. “To see the impact of that human conflict manifest was very informative.”

The Channels contacted Spangler Adams after the event to understand her perspective of the conflict.

“Yes: We are all human. Some are citizens, some are lawfully here, some are illegal residents,” Spangler Adams said in an email. “Regardless, everyone who is not a tourist who attends public, government tax-paid schools needs to be assimilated.”

Spangler Adams is a frequent speaker during public comment at Board of Trustees meetings and was vocal in the Pledge of Allegiance controversy from 2019.

The drama overshadowed what was supposed to be a spotlight on the candidates who are running for the assembly seat in the March 3 primary.

Murillo was not in attendance and Bennett left after the intermission.

The top two will face each other in a November runoff.

The exchange emotionally affected some of the candidates.

Blum said “I love you,” to Antoinette, and Granados embraced her in a hug.

Jonathan made a late-night Facebook post about the incident, but now he is trying to move on.