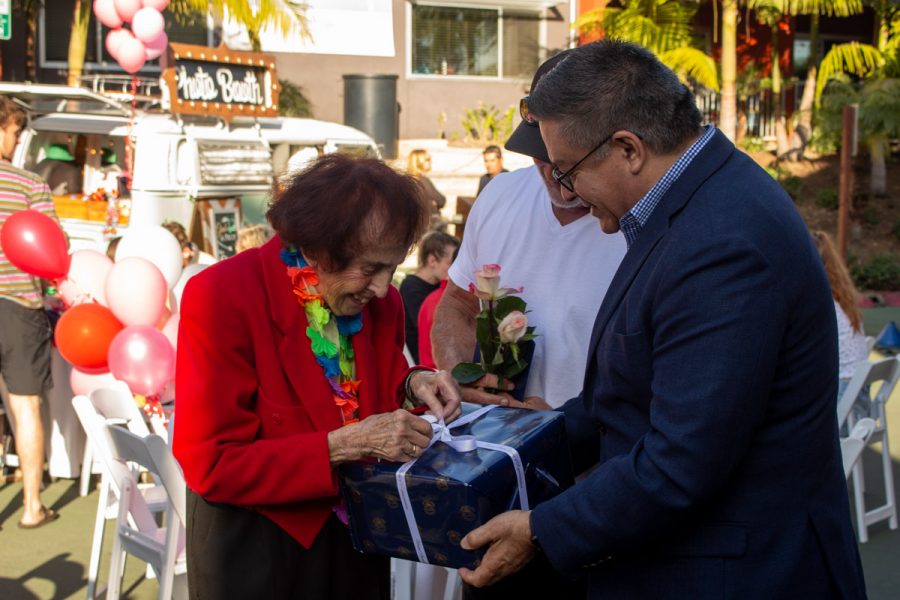 Despite this, Nell has found a family of sorts in the 450 college students living in Beach City.

St. George and Associates threw the party for Nell, which featured catering from Dave’s Dogs, a bouncy castle and a photo booth provided by 805 Camera Van.

Nell is one of three non-student residents of Beach City, which has been her home for the last 26 years.

Beach City became student housing when St. George bought it 6 years ago. Nell was worried that she would be told to leave, but he asked her to stay.

“Everyone respects her so much,” St. George said. “I always ask her if she wants to move to the first floor but she keeps saying no.”

Nell grew up in Chicago, and moved to Santa Barbara 30 years ago with her husband.

Students often help Nell with her day-to-day life, including taking her on grocery runs, helping her with her laundry and taking out her garbage.

“Students are good to me,” Nell said.

Nell is known as a figure of warmth and friendliness around Beach City. Many of the students who came to her party mentioned Nell’s infectious smile and young spirit.

“This is someone who is living a very good life,” said Carbajal. “This is a great way to honor her years of volunteering.”

Beyond her Beach City community, Nell also has her friend Rose Jaffe, a longtime Mesa resident who met Nell while ushering at the Garvin Theatre.

“We’re ladies that like to go out and have a good time,” Jaffe said.

Jaffe said she and Nell go out once a week. They have only been friends for about a year, Jaffe said, but they find comfort in each other’s company, both of them having lost their spouses years ago.

“When it comes to Jean, everyone gets along,” St. George said. “Even the kids who give us grief love her.”

Nell said she has never wanted to live anywhere else in Santa Barbara.