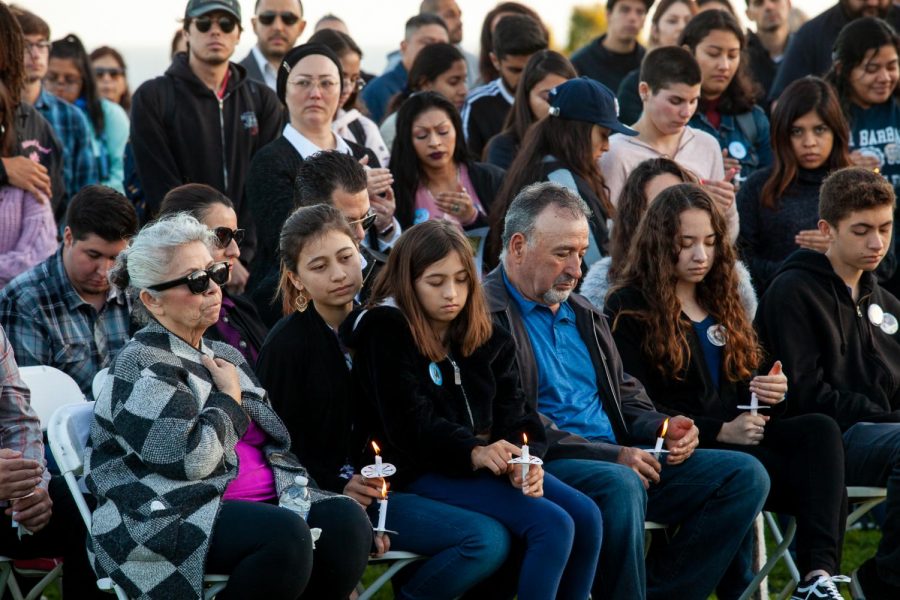 Adolfo and Mary-Jane Becerra Corrals' four children sit in the front row holding candles for the Vigil remembering their parents on Wednesday, Feb. 12, on the West Campus Lawn at City College in Santa Barbara, Calif. Several hundred people gathered to honor the Corrals and listen to family, friends and co-workers speak.

Adolfo and Mary-Jane were killed in a hit and run Sunday night in Goleta.

Eric Mauricio Ramirez Aguilar, 39, was arrested later that night for his alleged involvement in the incident, and is being held on multiple charges including gross vehicular manslaughter while intoxicated and fleeing the scene.

The vigil featured staff, faculty and student speakers whose lives were impacted by the work of Adolfo and Mary-Jane.

“There’s not a soul in this universe that duplicates Adolfo,” said City College Director of Admissions and Records Michael Medel.

Medel had known Adolfo from high school, but they reconnected years later when the two were interviewing for the same position at City College.

He described walking out of the interview and seeing his old friend Adolfo sitting in the lobby.

“We paused, we looked at each other. And together…‘tough.”

A trend throughout every story told about Adolfo was the phrase “tough.”

Sanchez said Adolfo gave the name tag to her when she graduated and transferred to Cal State East Bay, telling her to bring it back when she had her bachelor’s degree.

“That man saw something in me that I never saw in myself,” Sanchez said.

Many speakers noted that a majority of the students Adolfo mentored were low-income or first generation college attendees, and the crowd reflected the diverse range of students he helped mentor throughout his time at City College.

Adolfo worked at City College for over 15 years, and moved through many different departments, including EOPS, the STEM Transfer program and the equity department. He also took over as director of the Food Pantry last year.

He was expecting Corral to arrive to open the Food Pantry like he did every morning at 7 a.m.

As he waited for Adolfo’s arrival, he got a phone call.

“He was sociable and friendly. A great listener,” Smith said. “I was devastated.”

The vigil followed the impromptu memorial that was held Monday on Cathedral Oaks Road.

Community members gathered at the site of the accident, and shared stories and words of comfort to the Corral children.

Lori Gaskin, former superintendent-president of City College, said Adolfo was “one of the most respected, most regarded, and most loved,” employees at the college.

“The hearts and souls of your mom and dad will live on for generations through the students whose lives they have touched,” Gaskin said.

“He was proud to work here,” Azalea said. “He was proud of the impact he made, and of the people he could help.”

Azalea shared stories of being taken to EOPS events at a young age, and always being recognized as ‘Adolfo’s daughter’ from the photo he had of her in his office.

She also shared messages she had received throughout the week in support of her family, including her favorite:

“He was a f—— legend and he deserves to be remembered.”