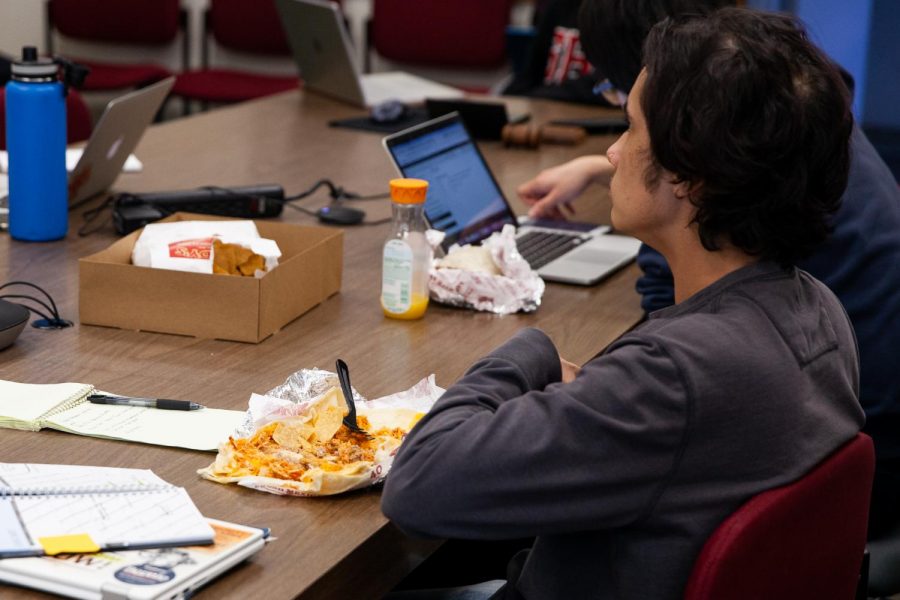 The Associated Student Government caters their meetings with food from restaurants like Rudy’s Mexican Restaurant and Denny’s to eat throughout the meeting.

The Associated Student Government spent upwards of $4,000 on catered food during the 2019 fall semester from places such as Rudy’s Mexican Restaurant and Denny’s, all out of the student representation fee.

Every week, when the student government meets, the senate orders a variety of food often including burritos, fruit, danishes and more for its 17 members and an additional amount for members of the public. The catered food accounts for nearly half of the student government’s meeting expenses.

The issue arose when Commissioner of Sustainability Natalie Blackwelder suggested eating at the cafeteria, which is only a short walk down the hall, rather than paying for outside vendors.

“We spend a lot of money for food on every meeting and I thought that was just ridiculous,” said Blackwelder. “I think that there’s other things on campus that need funding.”

The senate tried getting food from the cafeteria at its most recent meeting on Feb. 7. It’s unclear whether they will make the switch, but the current practice of ordering from off-site restaurants has existed for several semesters.

The issue of catered food comes at a time when students are suffering from growing rates of food insecurity. The food pantry, also a short walk from the student senate meeting room, represents an effort to aid in the problem.

The Student Senate receives its funding from the student representation fee, a $1 charge per semester added to the tuition of every student. For the 2019-2020 school year, the senate received over $130,000 from this fee alone.

“Most of the time it’s just a thought in the background,” she said. “It’s not so much of a concern.”

When De Oca first joined the senate, Student Program Advisor and former president Joshua Villanueva encouraged her to not be afraid to spend the money, she said.

“We have all this money so let’s spend it in a good and thoughtful way,” said De Oca.

Blackwelder finds food to be a less necessary expense. However, the way the money is allocated is very rigid and makes it difficult to use the student-generated funds for struggling programs such as the theater department, she said.

“It should be a little more fluid,” she said. “That’s way more important than spending money on food for the meetings.”

Blackwelder also raised concerns about the environmental impact of ordering outside food every week. She suggested the senate make the move to eating from the school’s cafeteria to keep the money within the organization and to make it more sustainable.

“I think it was more expensive to order from the school than order from the outside,” said Student Trustee Kenny Igbechi. Igbechi opposed the switch for multiple reasons, arguing that ordering the same thing from the cafeteria will be “boring.”

—Elias Loefgren contributed to this report.