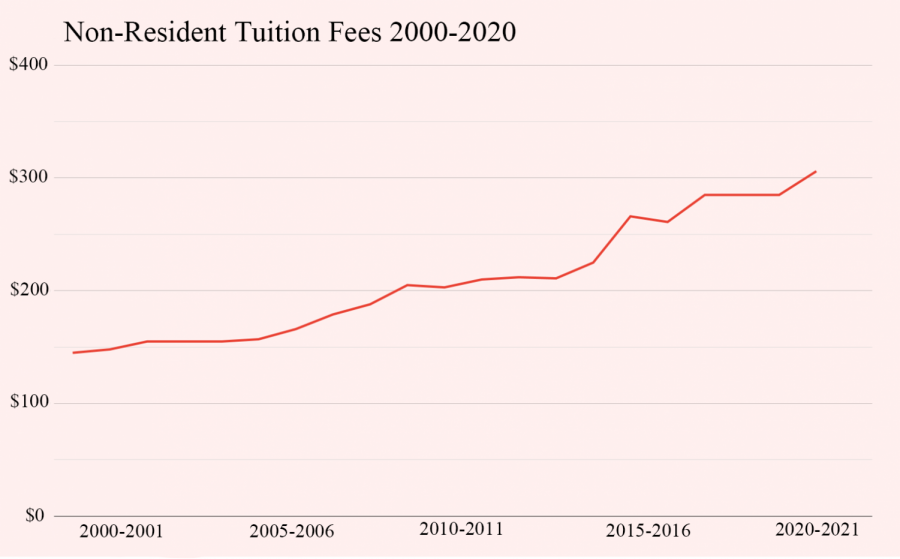 The non-resident tuition fee is expected to soar to $306 per unit before the next school year, raising concerns about declining enrollment and international student diversity.

The number of international students has been a heavily contested topic amidst community complaints and school-sanctioned caps, but the fee itself isn’t expected to affect numbers.

Rather, it could affect diversity.

Student Trustee Kenny Igbechi worries that students from poorer countries will be unable to come to City College as the fee increases.

“That increase is going to be very impactful on the school and the students,” he said.

As an international student from Nigeria, Igbechi “was thinking about students who want to come here from Nigeria,” he said.

Igbechi believes that a more diverse international student population can enhance learning for everyone and introduce new perspectives.

City College administration has little say in the decision to increase the price of tuition, as the standards for non-resident fees are set by the chancellor’s office every school year. The state provides the school with a handful of pre-determined price options, and City College consistently picks the lowest available option.

“We wanted to pick the lowest we could pick to have the impact as low as possible on the students,” said Vice President of Business Services Lyndsay Maas.

Maas presented the options to the Board of Trustees, which will vote on which to uphold.

Board of Trustees President Robert Miller wants to focus on “the bottom line” in order to choose the option that is best for students.

“I’m a big proponent of international students,” he said. Miller doesn’t believe the increase will affect enrollment rates, as he hasn’t seen it make a difference in the past.

In fact, he believes that the recent decrease in international students is for an entirely different reason.

“The decrease may have more to do with the international climate in Washington,” he said.

Under the Trump administration, delays and denials in the approval process for student visas have been more common.

“Currently what we’re seeing as more of a factor is international climate,” said Maas. “Some other countries would previously pay their students’ tuition to come over to another country but aren’t anymore.”

Igbechi, however, said that many students choose homestays and that international students are not the cause of the housing crisis.

The board hears these complaints often and has put a cap on the number of international students allowed at the school.

“The board, because they are very politicized, they just sit there and let them speak,” said Igbechi.

Despite the contention, Miller stresses the importance of international students, “not just for the dollars [the college] gets,” but for the “impact on the community.”

And as for the feared decline in student diversity, Miller hopes the state-ordered fee increase will not deter students.