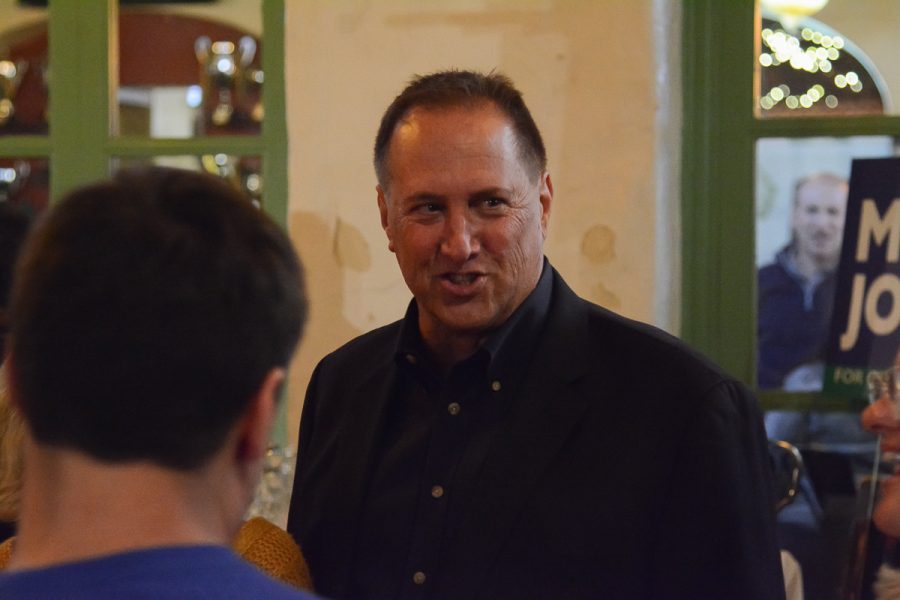 As the first tally of results poured in on election night, the District 2 results show frontrunner Mike Jordan leading with 144 votes ahead of Brian Campbell, and 486 votes ahead of Teri Jory.

The Democratic Party of Santa Barbara celebrated both candidates they endorsed, Jordan and District 1 candidate Alejandra Gutierrez at the Casa Blanca Restaurant and Cantina.

Many of Jordan’s supporters have commended the amount of experience he brings.

“The fact that he’s ahead in the tally reflects that he comes with so much experience,” Mayor Cathy Murillo said as she discussed his time on the City Planning Commissioner and the City’s Creek Advisory Committee.

With City College at the epicenter of District 2, support for the school was crucial to voters.

“[Jordan] has been really supporting Santa Barbara City College,” said City College Trustee Jonathan Abboud. “I want him to be a good partner with us.”

In a statement to The Channels, Brian Campbell said, “We have shown that a bunch of neighbors can come together, and we can win despite the odds because we have a purpose and a vision for our City and its residents.”

Campbell ran on the platform of improving safety in and around schools, and in the neighborhood’s parks.

Because ballots are vote-by-mail only and are being counted in Norwalk this year, Tuesday’s tally reflects a count of ballots up through Monday and the next tally of results will be released Friday.

In the heart of the Mesa, Jory opened her home to supporters, beginning the night with a short speech.

“It’s been such a great journey and I would do it again in a heartbeat,” said Jory, prior to hearing the first wave of results.

A total of 20 people gathered in Jory’s first-floor living room and conversed around sushi, cheese platters and wine.

“In this moment, we should all raise our glasses and celebrate what Santa Barbara is and can be, to Teri,” said Jory’s husband, Seth Geiger.

The crowd fell quiet as a friend of Jory’s announced the results, but optimism and support spread throughout the room as she was informed she had received 17.24% of the ballots counted so far.

Jory and her campaign are confident that they will take the lead after all the votes have been tallied.

“You never know what the voters will respond to but we have to wait to see the final results for last-minute voters,” said Geiger.

Jory said she is confident that she knows her voters well, and hopes that their support is enough to help her pass Jordan in the polls.

“Teri is infectious,” said Christina Schowe, Social Media Director for Jory. “This [campaign] is an energy I’ve never been around before.”

Until the final results are announced, all the candidates are staying optimistic and relying on the support of Mesa residents.

The next tally of votes will be released on Friday, which will include ballots received in the mail on Tuesday and Wednesday with a postmark date of Nov. 5.

Editors note: The story has been updated to include a statement from District 2 candidate Brian Campbell after the first tally of election results were announced at 8:30 p.m on Tuesday, Nov. 5.

Update Nov. 8 2:58 p.m.: The Nov. 8 tally results, which includes ballots received through Election Day and those received in the mail on Nov. 6 and Nov. 7 and postmarked on Nov. 5, show Mike Jordan remaining in the lead with 1495 votes. Brian Campbell is in second place with 1118 votes and Teri Jory is in third place with 753 votes.