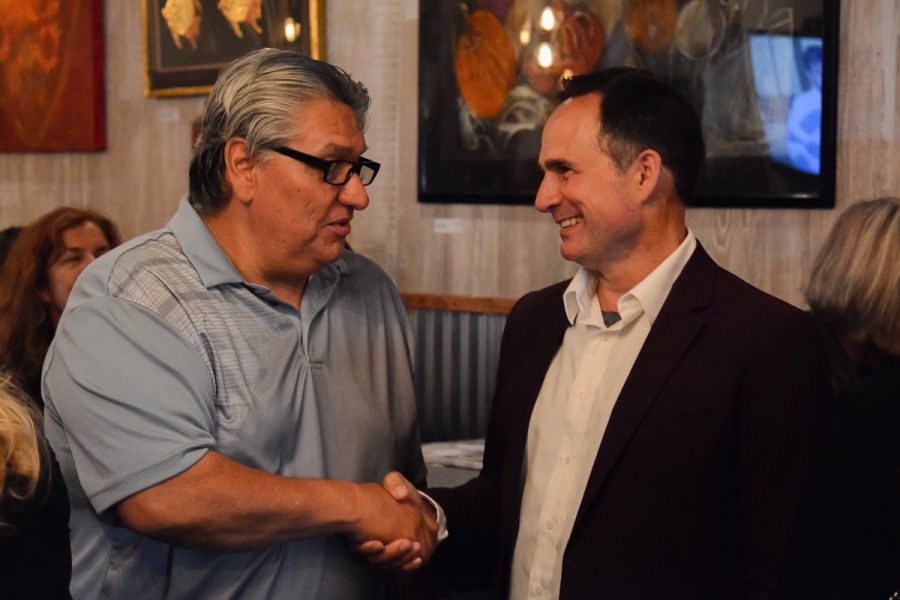 As tally results poured in for the Santa Barbara City Council District 1 election this Tuesday, it became apparent that Jason Dominguez and Alejandra Gutierrez are in for a close race.

Incumbent Dominguez is in first place with 563 votes, Gutierrez is close behind with 532 votes and third candidate Cruzito Cruz follows with 68 votes as of Tuesday night. Ballots were sent to a third party to be counted, and a tally including the votes from Tuesday will be announced on Friday, Nov. 8.

Both Dominguez and Gutierrez are optimistic about the final results and celebrated with their respective supporters on Tuesday night.

In the packed dining room of Uncorked Wine Bar on Haley Street, Dominguez gave what sounded like a victory speech to his friends, family and volunteers that showed up in support.

“We are running a high road campaign,” Dominguez said. “We don’t talk about the competition.”

Dominguez prides himself on running a clean campaign and staying away from shallow tactics that have made their way into politics, he said.

“The first time I met Jason, four years ago, he knocked on my door on a Saturday afternoon,” said April Montoya, a local east side resident who was born and raised in Santa Barbara. “I’ve never seen a politician come to my house.”

According to Montoya, Dominguez introduced himself as a candidate for City Council and asked if there were any problems he thought should be addressed in the neighborhood.

He has made it his mission to give voice to those who had previously been ignored since he won the seat in 2015.

“I’m always going to stick up for those who don’t have voices,” said Dominguez in his toast thanking his supporters.

Gutierrez is endorsed by The Democratic Party, which spent much of Tuesday encouraging residents to vote. The group expects an influx of last-day mail-in votes for Gutierrez by Friday.

The crowded patio of the restaurant bustled with enthusiastic supporters, and Gutierrez was met with cheers as she moved through the crowd.

“I feel really confident,” she said. “I really think that people are gonna come out.”

Santa Barbara’s district 1 often faces low voter turnout, but Gutierrez believes that her community-based approach to the race will help her close the gap.

“I’ve lived a similar struggle as my constituents,” she said. “I wanted to motivate and create hope for my district.”

Gutierrez is endorsed by the Santa Barbara Women’s Political Committee, and Board President Luz Reyes-Martin is also optimistic about the results. “She’s informed about her community… she’s trusted,” said Reyes-Martin.

Mayor Cathy Murillo also attended the party to show her support for Gutierrez. “I believe that Alejandra will catch up to the incumbent,” she said. “I think we’re gonna have really good news on Friday afternoon.”

Gutierrez is dedicated to serving her community even if she doesn’t win the council seat. “If I win or lose I really want to work on getting people registered to vote,” she said.

The updated results from the election will be available on Friday, Nov. 8.

Update Nov. 8 5:25 p.m.: Updated tally results which include mail-in and drop-off ballots from Tuesday onward have Alejandra Gutierrez at 939 points and Jason Dominguez at 929 points, with third candidate Cruzito Herrera Cruz at 97 points. Gutierrez has pulled ahead of incumbent Dominguez by 10 votes, placing her in the lead.