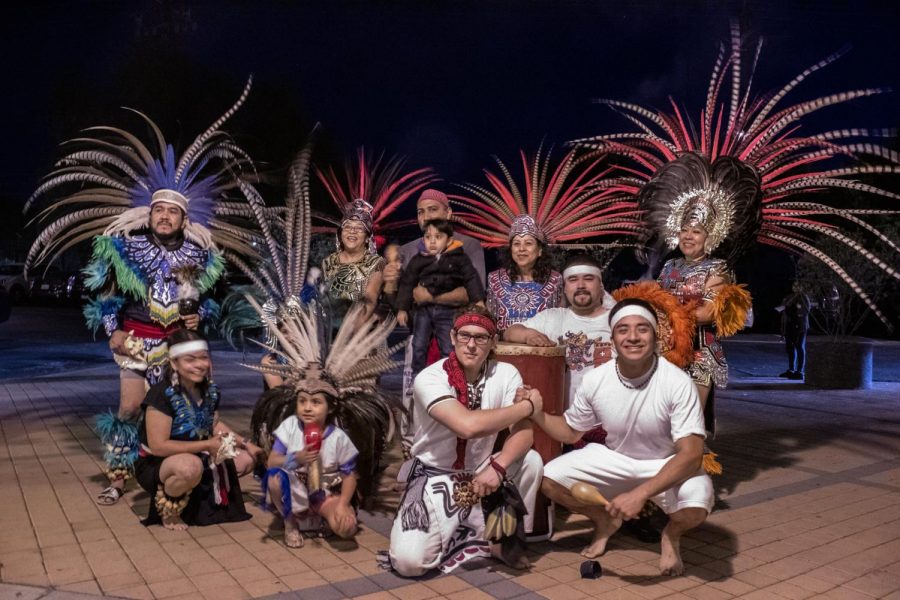 Diego Lazcano (Bottom right, left) and John Esteban (bottom right, right) meets with a Danza Azteca group at the St. Raphael Catholic Church in Goleta, Cailf., on Oct. 29, 2019, to perform a dance to express their culture and ancestry.

After years of lying dormant, City College’s chapter of MEChA is back in full force.

The group is part of a national student organization for Chicano empowerment and the City College chapter empowers students through connection with their indigenous roots.

Since the club’s re-emergence last spring, members of MEChA have been participating in community events and learning about their cultural roots.

Last Tuesday, members attended a celebration for Dia de la Virgen de Guadalupe, a Mexican Catholic holiday celebrating the appearance of the Virgin Mary to a native Mexican man in 1503, at the time of the Spanish conquest. The Virgen de Guadalupe, a Catholic saint, is a direct counterpart to Tonantzin, the Aztec Earth Mother, said MEChA member Tino Vargas. The saint and the holiday are ways for those to celebrate both their indigenous roots and their religion.

At the celebration, Lazcano and fellow MEChA member, John Esteban, danced with a traditional Danza Azteca group. Lazcano and many other members practice Danza Azteca, or Aztec dance, weekly as a way to connect to their indigeneity.

“I joined MEChA because I felt there was a need for us to come and express ourselves and be a community,” said Esteban.

MEChA grew as a movement at UCSB in the late 1960s out of the Chicano power movement. “That struggle, that fight, carries on until today,” said Esteban.

Historically, MEChA has been associated with strong political activism. However, City College’s chapter has been focusing mainly on regrowing the club and supporting causes.

“Our activism is more of a peaceful protest,” said Max Ortego, a member of the club.

One of the club’s pressing concerns right now is to preserve La Casa de la Raza, a community center in East Santa Barbara dedicated to empowering the Latino community. The center is currently underfunded and there are plans to build a parking lot in the space if it cannot raise the money. MEChA has held fundraisers to help support the center and attended events and forums to advocate for it.

MEChA also supports Native Like Water, an organization that “prepares indigenous youth and adult volunteers in science, outdoor education, conservation, wellness and cultural self-exploration,” according to its website.

While MEChA has traditionally focused on Chicano and indigenous culture, Lazcano said he wants to stress that anyone is welcome to join MEChA, regardless of cultural background.

MEChA seeks to remind members that they are “ancient but simultaneously modern,” said Lazcano.

In this sense, said Esteban, we are “all the same people.”