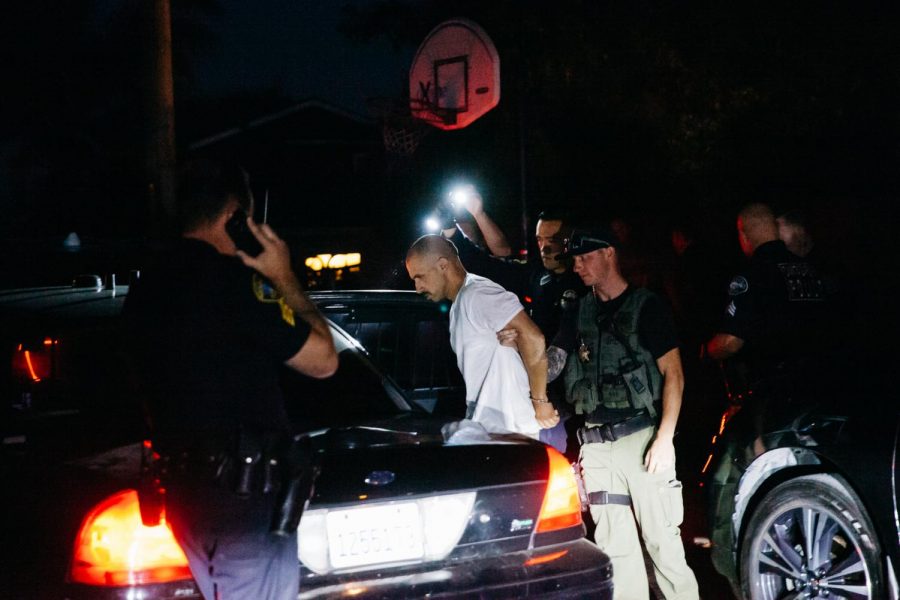 Police arrest suspect Fernando Huerta after City College went on lockdown for an armed shooter alert on Wednesday, Oct. 30, 2019, on Del Sol Ave and La Marina Street in Santa Barbara, Calif. Huerta fled police after being spotted behind the Luria Library and was unarmed upon arrest.

City College went on lockdown Wednesday after receiving a mass text from the City College emergency alert system that an armed intruder was on campus.

The mass text was sent out by Head of Security Erik Fricke through the college’s AlertU system. The text read: “Armed intruder SBCC Main Campus…RUN HIDE OR FIGHT!”

Students began rapidly fleeing the campus, getting into cars or running into buildings as all of main campus went on lockdown.

The suspected “armed intruder” was identified by officers at the scene of his arrest as Fernando Huerta.

According to Sgt. Eric Beecher of the Santa Barbara Police Department, Huerta is on felony probation and fled from police when he was approached.

Despite this, Beecher said Huerta was unarmed.

The Santa Barbara Police Department Public Engagement Officer Anthony Wagner said he is currently looking into why the texts were sent out.

“At no time did we confirm that he was armed,” Wagner said. “I don’t know how the school got that.”

According to Beecher, Huerta attempted to hide from the police in bushes between the Luria Library and Beach City.

Beecher said Huerta then tried to hide in a drainpipe but later fled into a resident’s backyard on the corner of La Marina Street and Del Sol Avenue.

Maxime Choboboda, a former City College student, saw Huerta fleeing through driveways and residences while walking through the neighborhood.

“I just saw him running. I just thought he was a robber at first,” Choboboda said. He said he was “more trying to hide than attacking anyone.”

“Me and my sister were walking on the street when we saw the man,” said neighborhood resident Alicia Gomez.

She recognized Huerta by his white shirt and noticed that he wasn’t one of her neighbors.

Gomez and her family called the police inside her home as they saw Huerta hop the fence into their backyard.

“He looked me right in the eyes as he stood in our backyard,” said Albert Apodaca, another resident living in the home.

Police waited outside the home for Huerta to walk out, and there was a “short altercation” as police arrested the suspect, according to Beecher.

Huerta was taken into custody around 6:30 p.m.

This story will be updated as more information is released.