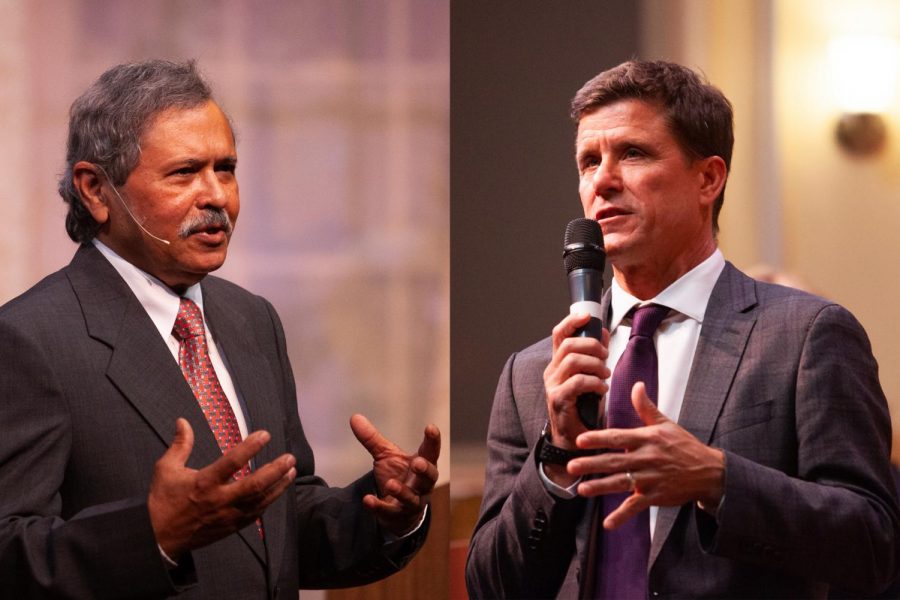 The search for a new superintendent-president of Santa Barbara City College burst onto the public stage Thursday when the two final candidates made their pitches for why they deserve the job.

More than 100 people — college teachers, staff, students and members of the public — packed the Garvin Theatre to hear the two finalists, Kenneth Lawson and Utpal Goswami.

It was the first public glimpse of the candidates who are vying to lead City College during one of the most tumultuous times in its 110-year history.

Lawson was outgoing, effusive and energetic on stage. Goswami was measured, careful and at times cautious in his answers.

“We have to determine what our values are and act on those values,” Goswami said.

“Maybe we have lost the art of dialogue,” he said.

Lawson seemed to win over the people in the room. “We need our faculty and staff to reflect the diversity of our students,” Lawson said, followed by applause from many members of the audience.

To keep communication open at City College, Lawson suggested the administration have monthly meetings with students and others involved with the college.

The college has been searching for someone to replace Interim Superintendent-President Helen Benjamin since she took over for Anthony Beebe, who suddenly retired in March this year

Whomever the Board of Trustees selects will be tasked with rebuilding the college’s reputation around race relations, restoring a $3.2 million structural deficit and returning focus on the college’s infrastructure and the sustainability of the campus.

The new superintendent-president must also wrestle with issues that stretch beyond the campus walls, such as housing and neighborhood impacts of the college throughout the city.

One of the most popular questions amongst audience members involved addressing equity and the racial tension that has carried over from previous semesters.

In addressing concerns surrounding budget cuts, Goswami said a solution is to look for funding outside of the college. He said he has worked with the foundation at his college to develop several new programs.

Goswami said his job on the foundation is to approach “high-network individuals,” for donations.

Lawson said it is important to remain honest and compassionate when dealing with personnel matters and issues surrounding classes being cut due to funding.

“As your superintendent-president, I will always be honest with you,” he said.

He also said it is important to hold leaders accountable, and encouraged anyone who has issues with his decision to come to him to discuss them.

He said when a community holds its leaders accountable it creates “a community where we trust one another, and that becomes core.”

In 2018, the former superintendent-president Anthony Beebe made $380,000 in total compensation.

The Board of Trustees will be meeting with the candidates on Oct. 25 to conduct the final interview before the new superintendent-president is announced.