Trustees open up to community about campus climate, problems 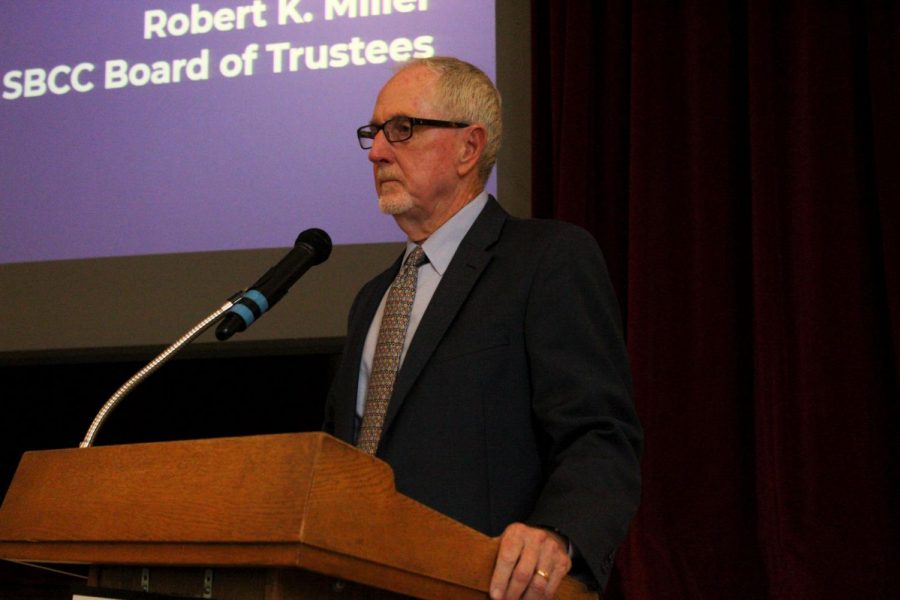 Board President Robert Miller reacts to questions asked by the audience of the "State of the College" presentation to the community on Oct. 3, 2019, at the Schott Campus in the James Tannahill Auditorium in Santa Barbara, Calif.

Coming off of one of the most explosive years in City College history, the Board of Trustees held a rare public forum at Schott Campus in an act of transparency to explain to the community the current climate of the college.

The forum was the sixth “State of the College” held, with three employee-oriented forums earlier in the semester at City College and one at Schott Campus. Another employee presentation was held at Wake Campus during the community forum Thursday.

Thursday was the final act before the college begins a new chapter in its search for a permanent superintendent-president. The leader will set the tone for the college for the next several years.

The board is expected to reveal the new hire on Nov. 5.

These forums come at a time of turmoil at City College, with several race-related issues being brought to the board last semester and a recent campus survey revealing the lack of trust employees have in the administration.

None of this was addressed at the forum.

Instead, each trustee attempted to explain a portion of a PowerPoint surrounding the budget, enrollment and the number of international students at the college.

After a brief presentation by each trustee, the floor was opened to the community to ask any burning questions it might have.

A popular question among community members was the reason behind the decline in enrollment.

“It’s actually a national trend,” said Trustee Marsha Croninger. “The demographics indicate that there are fewer students graduating from high school and going to college.”

Another issue was the number of international students at City College.

“We reacted to the community, so we do listen,” Neilsen said.

Some members of the community were not satisfied with this explanation.

“The public’s perception is… that the percentage of international students at City College was much greater than 10%,” said Pamela Shaw, an associate professor in the theatre arts department.

“I find that the Board of Trustees should be more transparent,” Shaw said, regarding the number and the percentage of international students.

Trustee Veronica Gallardo and Interim Superintendent-President Helen Benjamin said it would not be an issue to report both numbers and percentages.

The other widely discussed topic was the Student-Centered Funding Formula and the effect it has had on the budget.

The formula was created to encourage colleges to focus on the success of students, particularly underrepresented students.

After the Chancellor’s Office promised more money than available to California community colleges, some of it had to be forfeited, leaving City College with a wide deficit.

Trustee Croninger explained how City College is working to close the gap, including a hiring freeze and several campus-wide funding cuts.

“I think a lot of people’s big questions have been answered,” said Trustee Johnathan Abboud.

The finalists in the race for superintendent-president will give presentations in the Garvin Theatre on Oct. 24.