Society of Black Scientists and Engineers voted Club of the Year 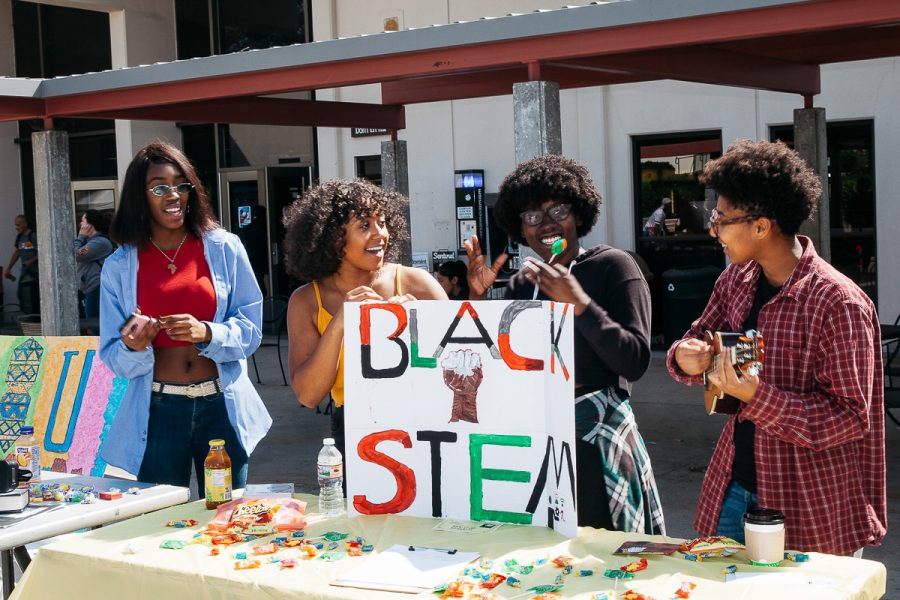 City College student Alexis Willis plays the ukulele while fellow Black Stem Club members Tiffany Love, in black, Jordan Cornett, in yellow, and Naiha Dozier-El, in blue, sing along and dance on club day at the Friendship Plaza at City College in Santa Barbara, Calif., on Wednesday, Sept. 26. “We have a community that we can thrive together and make sure we all feel united,” Love said.

The Society of Black Scientists and Engineers was voted Club of the Year at Friday’s Student Senate Meeting, with Society of Women in Space Exploration and American Sign Language Club receiving Honorable Mentions.

“To be aware of clubs and support them is a very important part of ASG’s service to the campus community,” Student Senate Advisor Amy Collins told The Channels.

Commissioner of Clubs and Organizations Alan Morales was in charge of nominating three clubs for the title.

“It was a very hard decision,” Morales said during Friday’s meeting. “I feel all torn apart because all the clubs are great.”

Morales said he chose the clubs due to the substantial impact they have had on the campus community.

Co-President and Founder of Black STEM Tiffany Love told The Channels one of the club’s main goals is to “give back to the community.”

SWISE, much like Black STEM, is a new addition to the campus.

“It was a good first semester,” Bianca Vasquez, President of the Society of Women in Space Exploration told The Channels. “I’m excited because we put in so much and it was recognized.”

Vasquez has managed to spread the organization nationwide after only one semester.

She will also be working over the summer to create “professional” chapters of SWISE so that, “students and professionals can link up.”

The ASL Club will be working over the summer with the American Sign Language program at City College to help make the Summer Immersion Weekend possible.

ASL’s Vice President Stephanie Linnander told The Channels that the immersion program is a “silent weekend” to help students to become better acquainted with ASL and the deaf community.

She said the club aims to take signing “beyond the classroom” while helping to create equal access for deaf and hard-of-hearing students.

Much like the ASL Club, Black STEM has managed to make students interested in STEM outside of everyday classroom lectures.

In March, several club members traveled to Detroit, Michigan to attend the National Society of Black Engineers Convention. After the convention, a few club members were able to secure internships.

Love said that in the future she would like to get involved with local high schools to create a mentorship program to show high schoolers that although STEM classes can be very challenging, they can also be very rewarding.

Damian Clogher, Treasurer of Black STEM, told The Channels about the importance of showing ethnic and cultural diversity in STEM.

Love elaborated by explaining that Black STEM gives way for representation in the sciences.

“Even though the climate is against us were still here,” she said.