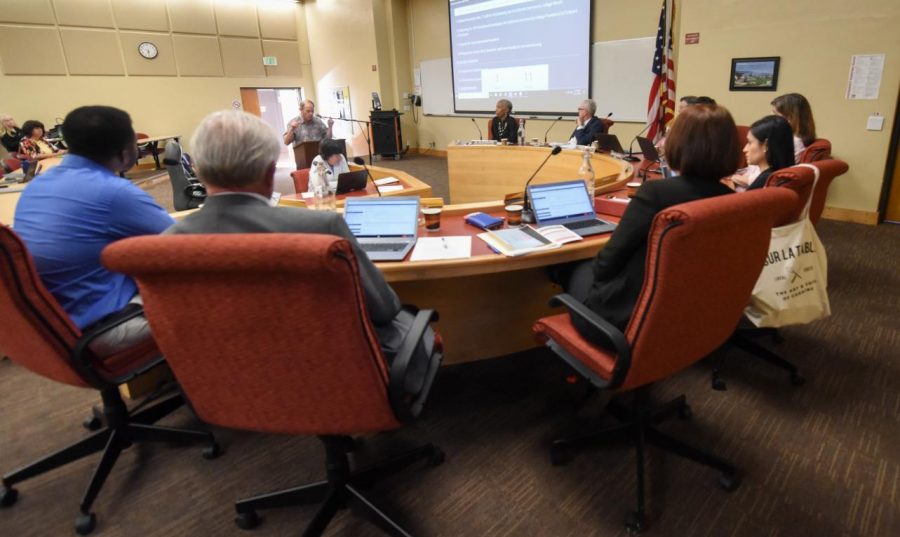 Gregory Koss speaks during the public comment section at a Board of Trustees meeting on Thursday, April 11, 2019, at City College in Santa Barbara, Calif.

After months of turmoil and tension, The Board of Trustees passed an amended resolution meant to address the current campus climate and provide steps to creating a more diverse and inclusive campus for underrepresented students.

“It’s time for us to heal,” President Robert Miller said. “Whether something is reflected in an investigative report or not, we have heard genuine authentic comments and pleas for us to lead.”

The resolution that passed was a product of the College Planning Council writing group that was asked to create a new resolution after three board members drafted their own version at the March 14 meeting.

The resolution acknowledges the state of City College being divided, and the comments several students have made to the board about being racially discriminated against.

Interim Superintendent-President Helen Benjamin said that while City College is diverse, diversity can come at a cost.

“When you have [diversity] you are going to have tension,” Benjamin said. “We have to figure out how to work together. That’s the bottom line.”

Many members of the community disagreed that the resolution was necessary, or that there was an issue of racism at City College.

“How is this [resolution] going to affect our college years down the line?” asked former professor Celeste Barber. “I never experienced a student displaying racist behavior or being a victim in all the years I’ve taught here.”

Community member Tammy Bollay said that music was to blame for the perceived racial discrimination.

“If you are worried about being black in America and being discriminated against, then I suggest you ban all students at City College from listening to hip hop and rap.”

“It was orchestrated,” Adams said. “We have found by following Facebook and other communications by one of our trustees on our board.”

Koss said that Abboud should recuse himself until the investigation into his interactions with Farmer has closed.

“There’s a troubling pattern of public communication on social media between Trustee Abboud and Krystle Farmer,” Koss said. “In order to create a false narrative of material racial bias.”

Trustees Veronica Gallardo and Croninger both said that the lack of evidence from the investigative report done on claims of racism made them hesitant to support the resolution without amending it.

“I feel the way it was written implies that there were confirmed incidents of racism,” Croninger said. “That is not what the investigation showed.”

Trustee Craig Nielsen also said he could not support the resolution without amending and having a more extensive discussion on it.

“What we’re dealing with here is feelings and emotions,” Nielsen said.

Student Trustee Kenny Igbechi said after talking to students about the resolution, he found many to be in favor of it.

“I think we have some very incompetent Board of Trustees members here,” Igbechi said. “I don’t think we should play politics with [students] destinies…You don’t go here you don’t attend classes here, so you can’t tell us how we should feel.”

Nearly five hours of deliberations occurred between the trustees about which clauses and words should be changed or struck from the resolution. This included taking out the formation of an anti-racism task force, and included the hiring of a Title Ⅸ coordinator.

The discussion went well into the night before the amended resolution was passed 5-2, with Trustees Nielsen and Gallardo being the only opposed.

While the resolution doesn’t provide specific dates or actions that will be taken in creating a more inclusive campus, it does stipulate that the superintendent-president will take all necessary action to improve the campus climate.