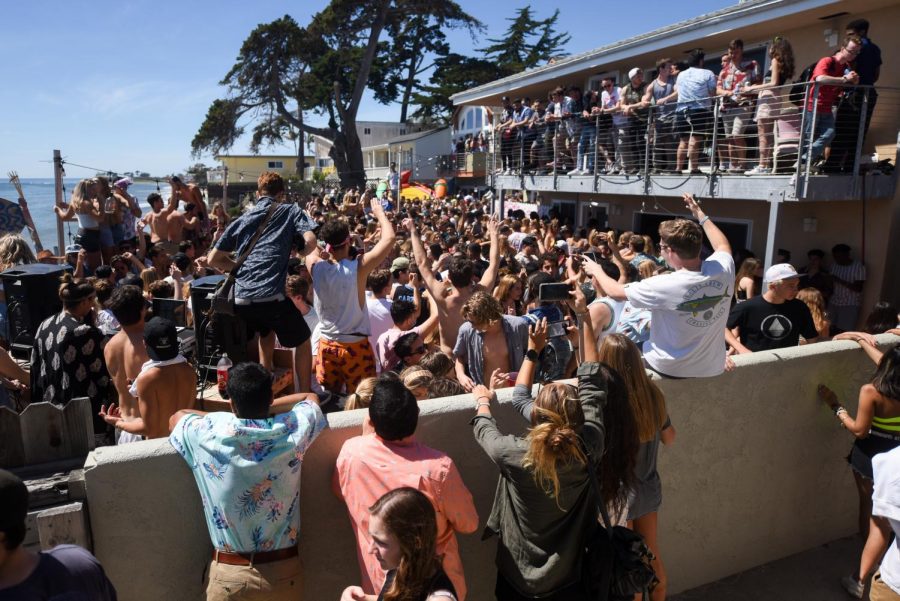 The crowd stretched across multiple backyards while a band played during Del Topia on Saturday, April 7, 2019, in Isla Vista in Santa Barbara, Calif.

Between 12,000 and 15,000 Deltopia street party-goers crowded the streets of Isla Vista last weekend, navigating between law enforcement barricades and checkpoints.

One intoxicated young women fell from cliffs and another slipped off of a rock. Both were transported to the hospital but did not sustain life-threatening injuries.

The University of California Police Department also broke up 10 parties and a fight where a young man was knocked unconscious by an 18-year-old from Oregon.

“It went pretty well,” said Kelly Hoover, public information officer for the sheriff’s department. “The weather is a major contributing factor. It was a beautiful day so we had a larger turnout.”

Some students noticed an increase in attendees.

Deltopia was created by students from UCSB and takes place every year on the first weekend of Spring quarter. It consists of free food, games, street parties, movies and a concert on Saturday night.

Though Deltopia is technically only for UCSB students, college students from all over North America made the pilgrimage to partake in Deltopia.

“I’m from Montreal, Canada,” said Jamal al Jamal, a student at McGill University. “I came here for Deltopia. All my friends live here. I thought it was gonna be more crazy. It’s less strict than I expected.”

“I’m from the Bay area but I used to live here,” said Austin Nguyen, a student from San Diego State University. “Santa Barbara is what I call home. Everybody here accepts you for who you are. It’s my second Deltopia. The first time I wasn’t really here if you know what I mean.”

For students who partook in heavy drinking and drug use, Emergency Medical Services Agency set up a tent with beds.

Nick Clay, two-year veteran EMSA director, said that students coming in with alcohol or drug-related incidents are usually very grateful for the services they offer. Clay said EMSA has been offering its services for about ten years.

“We had our [medical tent] and Medical Reserve Corps,” Clay said. “They’re volunteer medical professionals and they provided first aid service for the community. Most of [the young people coming in] are the result of someone calling on their behalf. We get a lot of apologies for being here. We get a lot of appreciation for the resources.”

The synchronicity between medical assistance, law enforcement and the fire department could be the reason why college students have been behaving better since the major riots in 2014.

“We’ve seen a significant drop in attendance over the years,” said Hoover. “It’s a major improvement from what it was. Everybody was very cooperative with law enforcement. We’ve had a more unruly crowd in the past and it wasn’t the case today.”